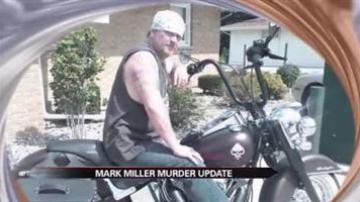 ELKHART COUNTY, Ind. -- The murder of Mark Miller, whose body was found in a barrel in the St. Joseph River in 2012, has been solved. Miller's business partner, Todd Stewart, was arrested and charged with Miller's murder.

Just six days ago, ABC 57 News sat down with Mark Miller's family as they promised never to give up looking for his killer. Now, they say they finally have some peace of mind knowing they are one step closer to getting justice for Miller's brutal murder.

"My family wants them to rot in prison. I don't. I want them to have the same thing done to them that they done to my brother," said Miller's brother Charles Parker.

On September 20, 2012, Miller's body was found in a barrel in the St. Joseph River near the Six Span Bridge in Elkhart County.

An autopsy determined Miller died as a result of a gunshot wound.

During the investigation, the Elkhart County Sheriff's Department learned that Miller owned and operated a tattoo business in Elkhart and was last seen around 11 p.m. on September 7, 2012.

Stewart told deputies he was working with Miller on the night of September 7th and left the shop between 11 p.m. and midnight. He said Miller was on his cell phone when he left.

The same witness said when he borrowed the truck on the morning of the 8th, the barrel was gone, the bed appeared to have been cleaned and there was a new cart in the back of the truck.

Using cell records, deputies determined Stewart's whereabouts on the evening of the 7th and the morning of the 8th. They also obtained surveillance footage of Stewart at Meijer purchasing a dolly hand truck.

A business associate of Stewart and Miller said that he was at the shop the night of the 7th and witnessed Stewart shoot Miller. He said he helped Stewart load a barrel containing Miller's body into the back of Stewart's vehicle.

"It kind of surprised me that Todd was involved in it just because Todd was suppose to be Mark's best friend," said Parker.

The sheriff's department forwarded their findings to the Office of the Prosecuting Attorney of Elkhart County. Stewart was charged with the murder of Miller and an arrest warrant was issued for Stewart.

Stewart will be in court for his initial hearing Thursday morning.