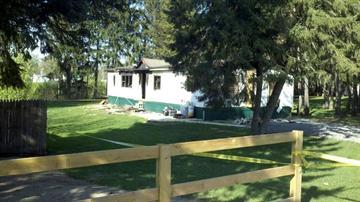 ELKHART COUNTY, Ind. - A young couple is picking up the pieces and making plans to start over after their mobile home was set on fire Wednesday morning.

The fire was one of several Wednesday morning at Pine Hills Mobile Home Park near Middlebury.

A car and shed were also set on fire. Two sheds were also broken into, one had more than $3,000 worth of tools taken.

As of early Friday morning no arrests had been made in connection to the string of fires.

The Elkhart County Sheriff's Office and Indiana State Fire Marshall's both said Thursday the investigation continues. No other details were released.

The young couple living in the mobile home lost everything. The woman, Roechelle Petershein is 7-months pregnant with her first child.

The family didn't have insurance because they were remodeling their home at the time. The couple was told by an insurance adjuster to complete the remodeling before getting a proper quote on what the home's value is.

Donations to the family are being accepted at Mullet Battery at 1513 East Lincolnway Ave in Goshen.

The manufacturer of the home that the family had is going to provide a new home for the family at cost and install it this weekend for free.