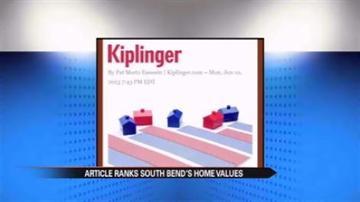 SOUTH BEND, Ind. -- Kiplinger, a Washington DC based publisher of business forecasts and personal finance, has placed South Bend second on its list of top twelve cities across the country where home prices have fallen the most in the last year. A local Realtor says the information in the article is misleading.

Quinn Thurin is the assistant Manager for Cressy & Evertt and he also is the president of the 2013 Greater South Bend Mishawaka Association of Realtor.

Last month he was interviewed by a reporter with Kiplinger.

When the article posted online Wednesday morning, the title of the article caught Thurin completely off guard.The article is, "Cities where home prices have fallen the most in the last year."

"I think there is misinformation out there,” said Thurin.

The article ranks South Bend home values as the second-worst in the country for falling the most in the past year.

"They are trying to pull out one or two statistics and are trying to write an entire story on it and I don't think that's accurate,” said Thurin.

ABC 57 and Thurin called Pat Mertz Esswein, the author of the article, from the South Bend Cressy & Everett office.

ABC 57 asked her how South Bend could be included in the ranking when the population in South Bend is not 250,000 or greater. The second sentence in the article states that, "these cities with populations of 250,000 or more experienced drops in home prices for the year ending March 31, 2013."

ABC 57's Judi Lykowski said to Mertz Esswein, "The bottom line is the article says South Bend, Indiana and then it says we are number two for cities where home prices have fallen last year most in the past year it does not say metropolitan area, it says city".

Mertz Esswein said, "I'll tell you what, next time I do this I will bring up this point with the editors who persist in not wanting to call these metro areas in every instance."

Thurin questioned where Mertz Esswein got her statistics that listed South Bend and or the South Bend areas one of the top twelve where home prices have fallen the most in the last year.

Mertz Esswein said, "Our source for home based data for metro areas all over the country is Clear Capital."

"I mean we are showing an increase in both the average and the median sale price of those two years. What is the difference between our statistical information and how did they come up with theirs?"

Mertz Esswein said, "They select, I guess you can say a basket of properties in the metro area and they follow the sale of those homes over time."

The mayor's office is looking into the ranking as well, and are hoping to gain more information from Mertz Esswein on what statistics she actually used to place South Bend as the second worst city across the country where home prices have fallen last year.

South Bend is known as one of the best cities for value in the housing market, and that article is not consistent with the latest data we have seen. According to the Indiana Association of Realtors, area housing prices are up nearly 1 percent year to date. The housing market is slowly trending up, and we are working hard to keep it growing.