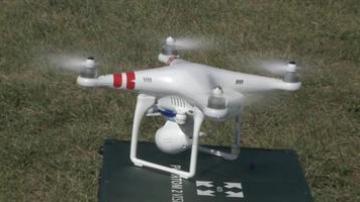 SOUTH BEND, Ind. -- It is getting easier for the average person to purchase and fly an unmanned aircraft - or drone. With new technology comes new regulations. The Federal Aviation Administration is expected to issue regulations by the end of the year.

What started as a hobby has become big business for Anthony Sydor.

He uses drones to take photos and video from the air.

"There aren't that many people around here that do this," said Sydor.

The number of drone users is small in Michiana, but it is a rapidly growing community.

The Federal Aviation Administration expects 30,000 drones in the air by 2020.

There are few regulations for drones.

"The FAA is about 10-15 years behind the time for legislation," said Sydor.

Over the last year, all across the country, there have been reports of people flying drones around landmarks and airports in an unsafe manner. Add privacy issues to those concerns and it's easy to see why people would be wary of them.

"I would love to have regulations for this," said Sydor.

From surveying weather damage to building inspections, Sydor sees an opportunity for local municipalities to lead the way where the federal government won't.

Although prices vary, you can get some models of drones for as little as $500.

The FAA has issued safety recommendations - including not flying them within 5 miles of an airport and keeping them below 400-feet.