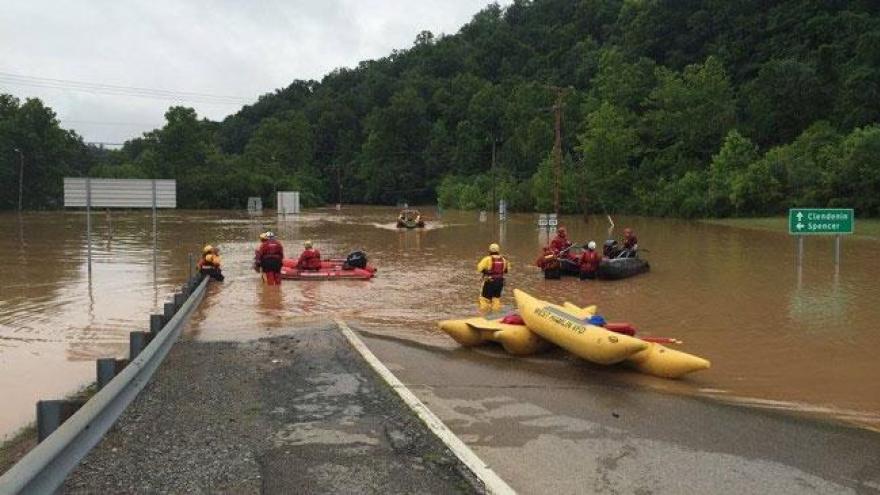 Trees and power lines fell as heavy rains Thursday night into Friday sent creeks and rivers out of their banks, leaving many stranded residents waiting to be rescued.

Forty-four counties declared a state of emergency Thursday night, primarily in the southeastern part of West Virginia. Officials say Elkview, Clendenin and Frame have been hit the hardest by the floodwaters.

A 4-year-old toddler was washed away by rapid floodwaters in Jackson County, officials said. The child was playing with his sister behind their home when he fell into what was once a little stream, which had turned into an instant rushing current after the relentless storms. An 8-year old boy from Ravenswood was also killed by the violent storm.

Severe damage to homes and infrastructure can be seen throughout the state, residents said. At one point during the height of the storms, there were 64 active emergency calls in Kanawha County, according to county spokeswoman Brooke Hylbert.

Stranded at a shopping mall

The rain washed out an access road at Elkview Crossings Mall, leaving nearly 200 people stranded when a bridge that connects the shopping plaza to the road, collapsed under the relentless downpour, residents said.

The National Guard is building a temporary bridge to help expedite the rescue mission at the mall. An on going evacuation is underway, sixty people have been rescued so far.

"The flooding looked like the ocean, there were these big waves," Agner said.

As the rain intensified Anger, who was planning to grab dinner with a friend, decided to head to his apartment instead, only to find his neighbor submerged in knee-deep floodwater.

"The water was so high," Agner said and decided against going inside his apartment to retrieve his belongings.

Agner saw homes and cars being swept away by the floodwaters right before his eyes,

"The house in front of where my apartment used to be is turned over, some houses are totally gone," the 26-year-old. told CNN.

"My apartment is gone," Agner said

ln the southern part of the state, forceful floodwaters launched a home in the city of White Sulpher Springs off of its foundation and down Howard's Creek, residents said.

Helpless witnesses said the house caught fire and was seen burning as it floated down the stream which runs through the town.

The luxury Greenbrier Resort, which is set to host the PGA Tour's Greenbrier Classic in July, was also severely impacted by the storms.

Resort owner Jim Justice released a statement saying that their focus is on helping the people, not "the property, the golf course, or anything else."

Professional PGA golfer Bubba Watson, who was at the resort when the storms hit, shared a photo and video on his Twitter account showing the state of the resort.