At least 24 killed in Oklahoma tornado 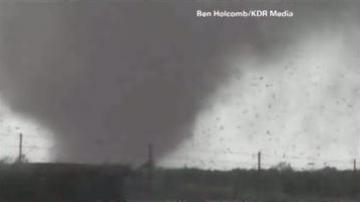 MOORE, Okla. — Authorities are confirming that at least 24 people were killed after a tornado rolled through Oklahoma Monday afternoon. And they say that death toll could jump.

Homes and businesses were leveled as the EF-5 tornado ripped through Moore, Oklahoma.

At least 7 children are among the dead after their elementary school took a direct hit from the tornado. Officials said that the children were killed when the school had its roof and walls blown off.

Officials say that at least 145 people were being treated at three area hospitals near Moore. The injuries ranged from minor to critical.

Oklahoma's governor said officials are doing everything they can to help find people who may be lost or injured.

"I know that there are families wondering where their loved ones are, and right now we are doing everything we can as a state to get as much emergency personnel, state agencies, all different charities that are out doing search and rescue efforts trying to make sure that we have looked under every single piece of debris and every single building," said Governor Mary Fallin.