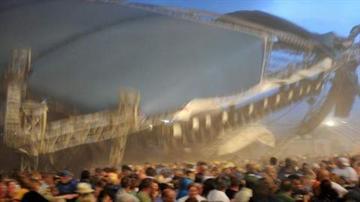 INDIANAPOLIS (WISH) - Indiana State Police have confirmed that there are fatalities after the main stage collapsed at the Indiana State Fair on Saturday night.

The Marion County Coroner's office confirms that four people have died. 24-Hour News Jessica Hayes reported that all of the most seriously injured have been transported to area hospitals and that the area around the state has been cleared.

Indianapolis Firefighters were called to the Indiana State Fairgrounds just before 9 p.m. with word that the main stage collapsed as strong winds blew in ahead of a thunderstorm.

The National Weather Service reports portions of the stage were blown into the grandstands. The entire roof of the stage was resting on the ground when 24-Hour News 8 arrived on the scene.

There is no official word on the number of injuries but numerous tweets indicate fair-goers have seen several people taken from the scene on stretchers. Our crew at the scene reports seeing many injured people.

A triage center has been set up at the fairgrounds.