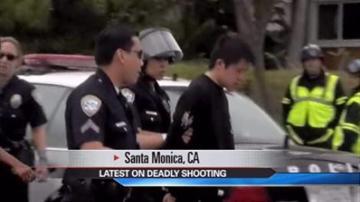 SANTA MONICA, Calif. — At least six are dead Friday night following a shooting near a college in Santa Monica, Calif.

According to police, a person of interest is in custody.

At least three people were wounded in the shootings.

The suspect set a home on fire. The same suspect was then seen on the street in front of the home shooting back into it.

There are still several questions involving the investigation. Detectives will be on scene throughout Friday night to gather evidence.