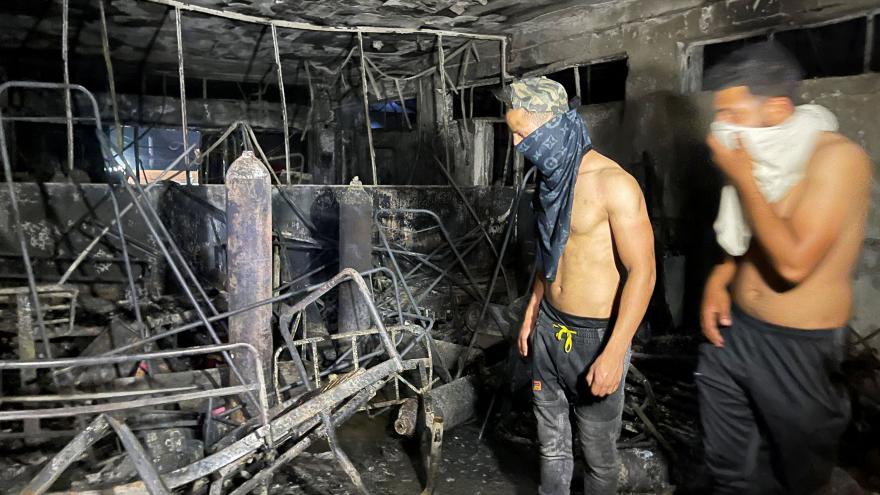 Another 110 people were injured in the blaze at Ibn al-Khatib Hospital, according to ministry spokesman Major General Khaled Al-Muhanna.

Social media videos showed a chaotic scene as firefighters scrambled to put out the blaze and health workers tried to evacuate patients. People from all over Iraq are referred to the hospital in southeastern Baghdad, including many with Covid-19.

"Civil defense teams are still at the scene of the accident, investigating the causes that led to this fire, which caused the loss of the lives of many of patients and their companions," according to a statement released by Iraq's Health Ministry earlier Sunday.

The ministry said health workers and civil defense teams were able to save at least 200 people including patients.

Both the health minister and the governor will be questioned in connection to the hospital fire, according to a statement released by al-Kadhimi's office.

The Prime Minister also ordered an "investigation that should be completed within five days, and a report to be submitted to the Council of Ministers," it said.

Al-Kadhimi said 10 million Iraqi dinar ($6,800) would be given to family members of each victim.

In a statement released by his office, Iraqi President Barham Salih offered condolences to the families of the victims, saying those found responsible must be held accountable.

Salih supported "the decisions adopted by the Iraqi government and the Parliament to call for an immediate investigation into the cause of the blaze until those at fault have been brought to justice," the statement added. He also urged all possible efforts to treat those injured in the fire.

The United Nations Secretary-General's Special Representative for Iraq, Jeanine Hennis-Plasschaert, expressed "shock and pain at the enormity of the tragic incident" affecting Covid-19 patients at the hospital, according to a statement from her office Sunday.

Twenty-eight of the victims were being treated in Covid-19 ICU wards, said Ali Akram al-Bayati of the Independent High Commission for Human Rights of Iraq (IHCHR).

In a statement, the IHCHR called on the Iraq government to take a "responsible position" following the hospital fire, saying the incident was a "crime against patients who were forced by the severity of the disease as a result of Covid-19 infection to be hospitalized."