Athos wants its clothes to be your personal trainer 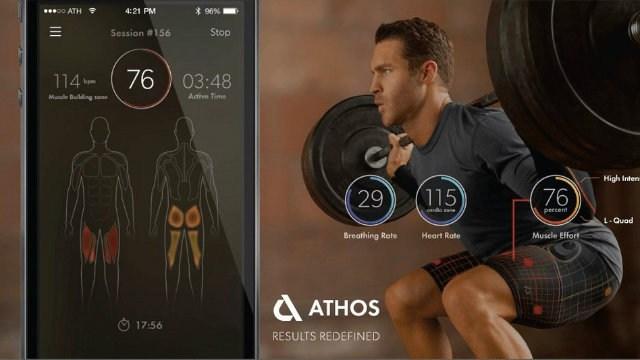 LONDON (CNNMoney) -- Athos is hoping its workout wear can turn fitness training into a science.

The wearable tech company makes clothes with built-in sensors to track how different muscles are used during a workout. A Bluetooth-enabled device transmits data back to a smartphone app, allowing users to see which areas they're working.

"So much of conditioning has been educated guess work," says Don Faul, the company's CEO. "Now, trainers can actually understand what athletes are doing on the field, what's working and what's not working, and how to use that knowledge to prepare them to perform their best. That's never been possible before."

The product was the brainchild of Dhananja Jayalath and Christopher Wiebe, two students from Toronto's University of Waterloo who also happened to be workout buddies.

They wanted to know if they were doing their exercises right, but couldn't afford a personal trainer -- so they decided to create their own digital fitness coach.

They use breathing and electromyography (EMG) sensors, which are built into the fabric, to track the electrical activity of the muscles and translate the data into a form that's useful for the wearer.

Faul says this has been one of the biggest challenges for the company. "For us, data in and of itself is insufficient," he explains. "What people want to know is, 'how do I use what I'm doing to get more out of my training?'"

Someone bench pressing in an Athos shirt, for instance, can look over the data and see if they're favoring one arm, and try to correct the imbalance. Someone doing squats can simultaneously glimpse at the Athos app to see if they're activating their glutes properly.

Based in Redwood City, California, Athos offers only a few pricey products: a men's shirt and shorts (together retailing for $547) and women's leggings ($149).

Faul says the company is currently focusing on professional and soon-to-be professional athletes -- from high school up through the Olympic level. The clothes are already being trialed by NFL hopefuls, as well as seasoned pros, like former world champion light welterweight boxer Amir Khan.

But Athos, which has raised more than $50 million in funding since its 2012 launch, has plans to target more casual users and add more products to its range.