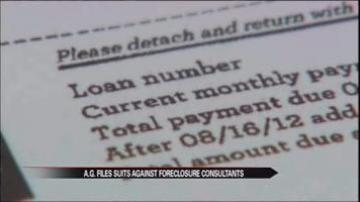 According to Zoeller, it is illegal for companies to charge homeowners upfront fees without first filing a $25,000 surety bond with the Attorney General's Office and none of the five companies, implicated in these lawsuits, did that.

It is a scam we are all too familiar with after the housing market crashed. Desperate homeowners facing foreclosure turned to whoever would help and were then ripped off by companies promising to keep them in their homes.

"This has been going on a long time and a lot of this is the economy and people getting behind on their mortgages, so unfortunately it has not eased up. Actually, we have seen, in our office, an uptick," said Zoeller.

So far, Zoeller has filed 140 lawsuits for these types of foreclosure scams and Wednesday he filed five more on behalf of eight victims in St. Joseph County and Elkhart County.

"Mortgage foreclosure rescue companies will call on people asking if they would like help getting a better mortgage rate." Zoeller said if you start getting phone calls, letters or advertisements from companies offering to help that should, immediately, be a red flag.

"When you get a notice of foreclosure that's a public record so people know that you have gotten these and you get targeted by scam artists," said Zoeller.

That is what happened to the latest victims here in Michiana and now the Attorney General's Office is seeking injunctions, restitution and civil penalties against the companies.

Zoeller said he trying to send a message to those companies trying to take advantage of Hoosiers, but he also has a message for homeowners. "If you are behind on your mortgage contact your mortgage company, work with groups that are able to help that are not for profit; that won't charge you money."

To avoid one of these scams, the attorney general says just hang-up on unsolicited phone calls and do not by into advertisements making promising results that are too good to be true.

Here is a list of the five companies accused of taking advantage of Hoosiers:

Anyone who thinks they has fallen victim to one of these companies is urged to contact the Indiana State Attorney General's Office. Although the lawsuits have been filed, victims can still be added.

Zoeller also said that thanks to an Consumers Protection Act Assistance Fund, homeowners can now get a pay out from the state to recoup their losses.