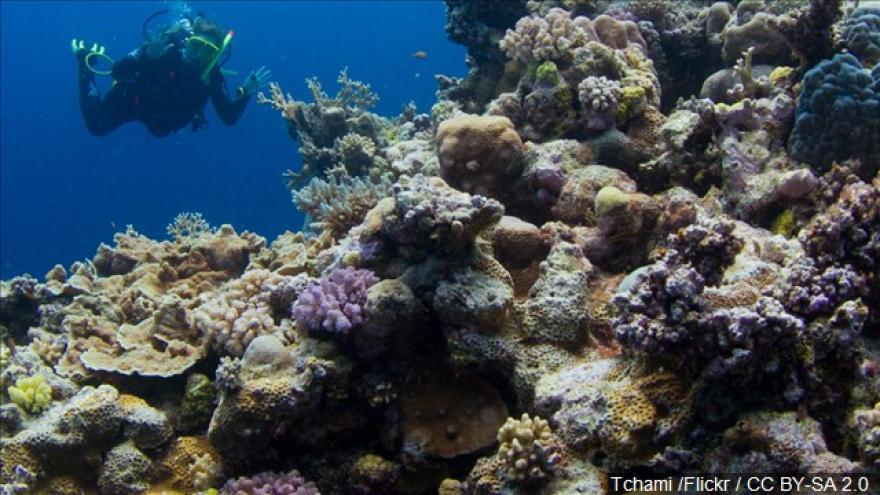 Described by the Australian government as the largest single investment for reef conservation and management in the country\'s history, the money will be used to improve water quality, control a major predator, and expand reef restoration. Photo courtesy Tchami / Flickr / CC BY-SA 2.0

(CNN) -- Australia has pledged more than 500 million Australian dollars ($379 miillion) to help preserve the Great Barrier Reef, in an attempt to help better protect the world heritage site from the effects of climate change.

Marine heat waves caused by global warming killed off and damaged corals in 2016. Most of the impact was along 500 miles of the northern Great Barrier Reef, its most pristine region.

The new funding is part of an ambitious conservation plan that will see the Australian government partner with the Great Barrier Reef Foundation to improve and monitor the long term health of the reef.

Described by the Australian government as the largest single investment for reef conservation and management in the country's history, the money will be used to improve water quality, control a major predator, and expand reef restoration.

The Great Barrier Reef is home to the world's largest collection of coral reefs, with around 400 types of coral and 1,500 species of fish. It is also home to a number of endangered species, including the large green turtle and the dugong.

Speaking to reporters after the project's unveiling Sunday, Australian Environment Minister Josh Frydenberg said the reef was under a lot of pressure but those challenges could be overcome.

"The more we understand about the reef, the better we can protect it," Frydenberg was quoted as saying by the Australian Broadcasting Corporation.

"Millions of dollars will go into science and to better data management and to be able to test the impacts on the reef," he added.

Aerial surveys conducted in April last year showed more than two-thirds of the coral in the Barrier Reef had experienced "shocking" amounts of bleaching.

Coral bleaching happens when an increase in sea temperatures causes the expulsion of algae that grow inside coral, turning the reefs white and eliminating their main energy source.

Before 2016 there had only been two bleaching events along the Great Barrier Reef in the past two decades, in 1998 and 2002.

The 2016 bleaching event, the worst on record, mainly affected the north of the reef, while the recent damage has mostly impacted the middle sections, according to scientists at the ARC Centre of Excellence for Coral Reef Studies.

The bottom third of the reef is now the only section that has escaped significant bleaching.

Bleaching doesn't kill coral straight away -- if temperatures drop, the algae has the chance to recolonize. But if temperatures remain high, eventually the coral will die, removing the natural habitat for many species of marine life.

The Great Barrier Reef is considered to be one of the seven natural wonders of the world and is the largest living structure on the planet. It's even visible from space.

The Reef is worth an estimated $3.7 billion annually to the Australian economy through fishing and tourism.

Around 275 million people globally directly rely on reefs for livelihood and sustenance, and globally they form the nurseries for around a quarter of the world's fish, according to the UN.