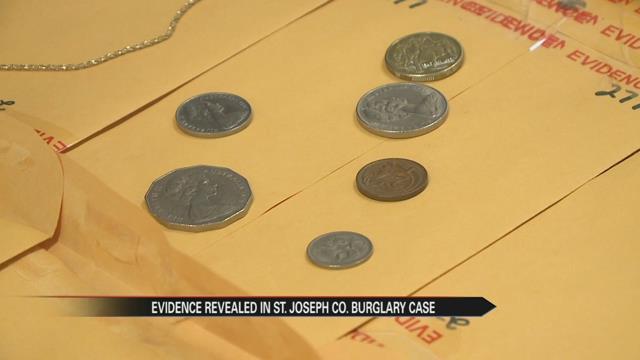 St Joseph County and South Bend Police are looking for the owners of items found in a suspected burglar’s home.

The items range from watches to pendants to rings.

They were all found in the home of Darrell Vaughn, an Elkhart man police suspect of burglarizing multiple homes around the holidays.

“There are some items here they believe to have been stolen but have not been identified to a particular victim,” said St. Joseph County Prosecutor Ken Cotter.

The items were found in Vaughn’s home during a warrant search, executed after months of police keeping an eye on the suspect.

They put in a lot of man hours. I mean, we’re talking thousands of man hours. They started working on this particular suspect late last fall, and have continued on until his arrest,” said St. Joseph County Sheriff Michael Grzegorek.

The investigation included putting a GPS tracker on two of Vaughn’s cars, tracking him to locations where burglaries were taking place.

Eventually there was enough evidence to charge him with two counts of attempted burglary, and one count of burglary.

“If further evidence leads us to believe he committed other crimes, then we’ll proceed accordingly,” Cotter said.

Meanwhile, Vaughn is being held in the Elkhart County Jail until he can be moved to St. Joseph County.

Police are hoping for more info on the found items, that could be the key to investigating more crimes.

“If you see an item over there that you think may have been yours, contact the St. Joseph County Police or the South Bend Police,” Cotter said.