Baby on Board badge not just for cars in New York 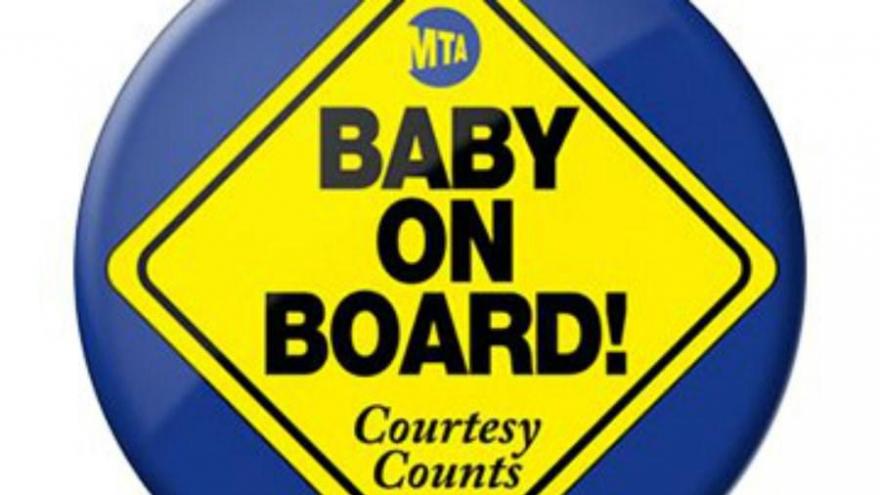 (CNN) -- The "Baby on Board" motto works for more than just car commuters. At least that's what the New York Metropolitan Transportation Authority hopes as it launches an awareness campaign to encourage courtesy in subway cars.

The MTA has begun issuing blue and yellow "Baby on Board" buttons as part of the agency's Courtesy Counts campaign to encourage strap-hangers to be polite to their fellow riders.

The pilot program begins on Mother's Day and runs through Labor Day.

Customers who are pregnant can choose from a "Baby on Board" button or a "Please Offer Me a Seat" button, which can also be worn by seniors or customers who have disabilities.

"Pregnant riders, seniors and those with disabilities often need seats more than others but their condition may not always be visible," said MTA Interim Executive Director Ronnie Hakim. "We hope this campaign will help their fellow riders to be more willing to offer them a seat without having to ask a personal question first."

Transport for London in 2005 launched a similar program for the Tube, as London's subway is known. The badges gained popularity after Kate Middleton, the Duchess of Cambridge, wore one in 2013 during a visit to Baker Street Underground when she was pregnant with her first child.

According to New York transit officials, "As with London's system and many other MTA 'Courtesy Counts' messages (such as 'Don't Be a Pole Hog' and 'Stop the Spread'), this awareness campaign will be self-enforced and not linked to any penalties."

Riders can order a free button online, and it should arrive in about three weeks. The MTA is also encouraging passengers to spread awareness of the campaign by posting selfies with the hashtags #BabyOnBoard and #CourtesyCounts.