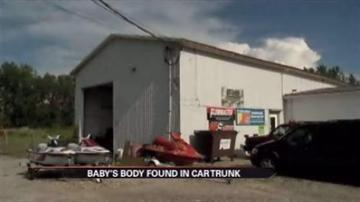 SHELBY, Ohio -- A mechanic found the body of a baby inside a car trunk at an Ohio car repair shop.

The mechanic says he noticed an odor coming from a box in the car's trunk.

The owner told him to throw it away but he opened it out of curiosity. Inside the box was the body of a baby.

"I had to stand there for a minute and look at it because I didn't think it was real," said the mechanic Ron Hamilton.

Police say the baby belonged to the car's 17-year-old driver.

Her parents who owned the car did not know their daughter was pregnant.

The teen told police she had the baby in January.

They believe she had been driving around with its body since giving birth.