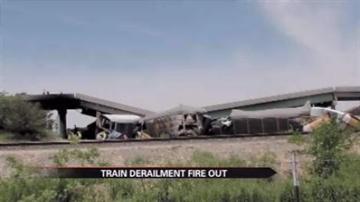 ROSEDALE, Md. -- The fire from a massive train derailment near Baltimore is finally out.

Crews were able to get the fire under control just before midnight, nearly 10 hours after the train derailed.

There was no crossing gate at the intersection where the train and a trash truck crashed Tuesday.

Chemicals in one of the derailed cars exploded - creating concerns for nearby buildings.

"We have requested building engineers to look at these buildings and determine their stability. Once that's determined then people will be allowed back in," said Captain Bruce Schultz, Baltimore County Fire Department.

Crews are keeping watch over the site just in case. Federal investigators are on the scene.

The truck driver is in serious but stable condition. No one else was hurt.