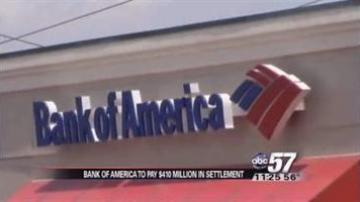 UNITED STATES -- Bank of America customers could see a small credit to their accounts soon.

It's part of a multimillion dollar settlement on overdraft fees. The bank is accused of processing debit transactions in order of highest to lowest dollar amount, forcing excessive overdraft fees on its customers.

More than 13 million account holders will receive a piece of the $410 million settlement. The settlement specifically applies to debit card customers who paid overdraft fees between January 2001 and May 2011. Bank of America still says they processed debit charges properly.

If there is no appeal, customers could receive their portion of the settlement in the next month or two.