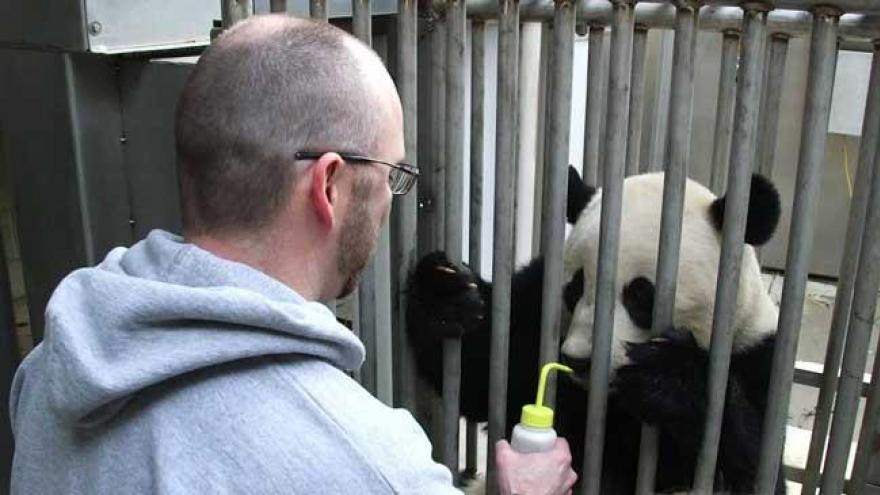 WASHINGTON (CNN) -- Everything she owns is in a box, and it left.

The Smithsonian National Zoo's beloved panda, Bao Bao, 3 1/2, began her move to Chengdu, China, Tuesday, and to many in Washington she is, indeed, irreplaceable.

Panda Mei Xiang gave birth to Bao Bao on August 23, 2013, in what turned out to be a successful birth following the death of her 6-day-old panda cub one year earlier. After an online vote, the 100-day old cub was named "Bao Bao," which translates as "precious" or "treasure." Visitors flocked to the National Zoo in Northwest Washington to get a glimpse of the cub when she made her public debut in January 2014.

But Bao Bao was always destined to return to her ancestral home due to a longstanding agreement between China and the US. The National Zoo has been preparing for her departure since the day she was born.

"We've been planning for this from the moment she was born. You know, as soon as she hit the ground, we all knew, she's going to be going to China at some point. So we started training her and doing all the things we would need to do to help make her trip better," National Zoo animal keeper Marty Dearie told CNN.

Bao Bao, who has been living separately from her mother, as pandas do in the wild, for nearly two years, underwent a full veterinary exam last week ahead of her flight to China.

"We have no concerns, everything seems pretty normal right now, but we just like to make sure before we send them, especially since it's such a long flight," Dearie said.

Bao Bao boarded a nonstop flight from Dulles, Virginia, to Chengdu, China, in a large crate aboard the custom-decaled "FedEx Panda Express" 777F aircraft. She is accompanied by keeper Marty Dearie and a veterinarian, as well as 55 pounds of bamboo, 2 pounds of apples, 2 bags of leaf eater biscuits, 2 pounds of sweet potatoes, 10 gallons of water and some sugarcane, per the National Zoo. Flight crew members in "FedEx Panda Team" sweatshirts helped facilitate the transfer.

For those hoping to keep tabs on the journey, the 16-hour flight is available on FlightTracker.

Keepers have been getting Bao Bao accustomed to her traveling crate over the past few weeks.

"The panda team will continuously monitor Bao Bao during the trip and will travel with a supply of her favorite treats," the Zoo said in a statement.

The giant panda was removed from the International Union for Conservation of Nature's list of endangered species in September 2016. Thanks to an increase in available habitat, the giant panda population rose 17% from 2004 to 2014, leading to the downgrade from endangered to vulnerable.

Bao Bao will soon do her part, entering a breeding program in Chengdu when she reaches the age of 5 or 6.

"It is hard, but we know that we're sending her back to be part of the breeding program and to make more baby pandas," Dr. Brandie Smith, senior curator of giant pandas at the National Zoo, told ABC News when Bao Bao was a cub. "So, I think a lot parents can relate, from the moment our kids are born, we train them to go off and succeed on their own. So, that's what we're doing for Bao Bao."

The Zoo said farewell to Bao Bao with a series of goodbye events over the long weekend, including a dumpling party, multiple heart-shaped ice cake feedings, and interactive Q&As with keepers.

The National Zoo is closed to the public Tuesday. Packed in her crate, Bao Bao rolled out of the panda enclosure in the morning, towed by a forklift with panda ears and a tail.

Chinese Ambassador to the United Stats Cui Tiankai was also on hand to say goodbye, along with Zoo director Kelly.

"Today is bittersweet," Zoo director Dennis Kelly said in a statement. "We've watched Bao Bao grow up during the past three years, and she has charmed people all over the world with her independent and playful personality. We're so proud of our team who have prepared Bao Bao for the next chapter of her life as she enters the breeding program in China. This is another milestone in our 45-year history of working to study, care for and help save the giant panda and its native habitat."

Hours later, Bao Bao's crate was elevated into the panda-decaled 777. Bao Bao on board, the plane pulled away just before 2 p.m., and she began the long journey to her ancestral homeland.

The zoo first received a state gift of two pandas from China in 1972, following President Richard Nixon's visit, and has participated in panda loans and exchanges ever since as a gesture of good will.

Under the agreement, the offspring of the gifted pandas belong to China and must return by age 4.

"China and the United States collaborate closely in scientific research about and conservation of giant pandas ... Because it's very difficult for giant pandas to breed naturally, Chinese and Americans have been working on breeding them through artificial insemination," Tiankai wrote in a Washington Post op-ed.