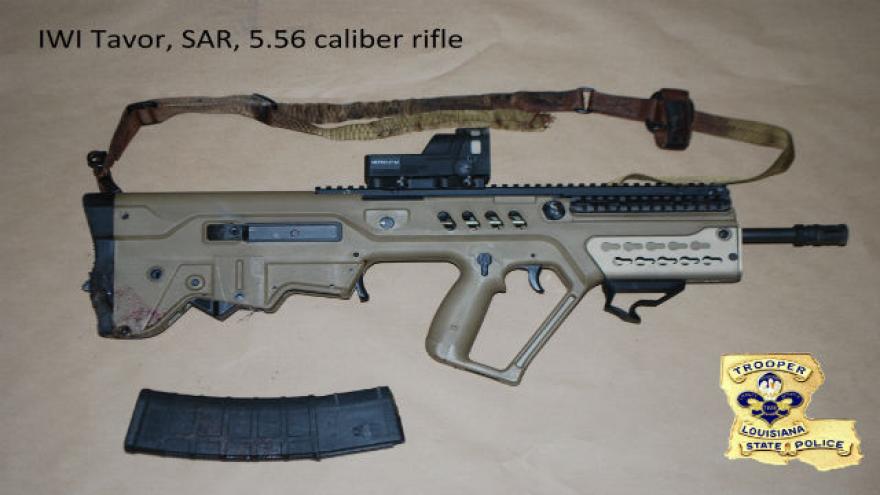 (CNN) -- The Louisiana law officers who killed Gavin Long after he shot dead three of their colleagues in a targeted attack on police in Baton Rouge last summer were justified "and certainly saved other lives," a prosecutor said Friday.

East Baton Rouge Parish District Attorney Hillar Moore III released the results of an 11-month investigation into the July 17 attack, in which Long killed three cops and injured three others in a nation already roiled by several police-involved shootings that month.

Long, a 29-year-old black Missouri resident and discharged Marine, arrived in Baton Rouge five days earlier and was determined to kill police officers, "black or white ... as long as they had a badge," Moore said in a news conference.

Moore's investigation report, as well as newly released surveillance videos and police dispatch recordings, presents the fullest picture yet of how the shootings unfolded that Sunday morning outside several businesses in Louisiana's capital.

Here's some of what was revealed:

In a three-page note found in his rented vehicle, Long wrote that he needed to bring destruction "upon bad cops as well as good cops" because of what he saw as the justice system's failure to prosecute bad police officers who commit crimes against "my people," Moore said.

-- The July 7 killings of five police officers in Dallas by a black man who said he was upset by the shootings of Sterling and Philando Castile, a black motorist killed by police that month in Minnesota.

Long left a trail of writings and videos describing his thoughts and worldview under the name Cosmo Setepenra.

On July 10, he posted a YouTube video in which said he was in Dallas, days after the killings there. He talked of recent protests and officer-involved shootings, and of a notion that victims of bullying need to resort to brute force.

Police say he drove to Baton Rouge on July 12, then spent nights in several hotels. In his note, Long called his actions a "necessary evil" that he hoped would spur good cops to demand that bad ones be held accountable.

The note appears similar to a message that he reportedly emailed to an Ohio rapper -- someone he didn't know but had communicated with online -- shortly before the shooting.

A search of Long's laptop, also found in his car, showed it was used to search for information about the two police officers who shot Sterling, the report says.

He fired 43 rounds over nearly 14 minutes

He also shot and injured officers Chad Montgomery and Bruce Simmons, and East Baton Rouge sheriff's deputy Nick Tullier. Tullier, shot in the head and abdomen, was in a coma for four months before being transferred to a rehabilitation facility in Houston.

Long fired 43 rounds. Here's how the nearly 14-minute attack began, according to Moore and surveillance videos:

-- Long parked his rental car outside a beauty supply store, walked out with a semiautomatic rifle, checked an unoccupied police car outside a nearby B-Quick convenience store, returned to his car and drove away.

-- Someone went into the B-Quick and told Gerald, who was at the checkout line, that a man was outside with a rifle.

-- Gerald and Garafola, who also was at the B-Quick, went outside to look for the gunman and radio for backup. Jackson, at a car wash next door, went to the B-Quick in response.

-- The three officers walked around the beauty store. Long drove back to the area, parked and walked toward the same store.

-- Long, wearing black clothes and a mask, walks past several civilians, at one point waving to one group.

-- Long caught up from behind, shooting and killing Jackson and Gerald. Montgomery and a partner arrived in a car; Long shot and injured Montgomery.

-- "Shots fired! Officers down," Garafola radioed before trying to reach Gerald. Garafola died in an exchange of gunfire with Long, who then shot Gerald's body twice more.

Long eventually shot Tullier and Simmons, who arrived where Long had parked his car outside a fitness studio. SWAT officers arrived and shot Long in the leg. Collapsed on the ground, Long reached for his dropped rifle, but five SWAT officers fired, killing him, Moore said.

Throughout the battle, officers fired 106 times. Eighty-nine of those shots came from SWAT officers.

Moore said long had a total of 45 entry and exit wounds.

Long had alcohol, methamphetamine in system

A toxicology report found Long had a blood-alcohol content of .021%. It also detected methamphetamine in his system, Moore said.

A separate semiautomatic rifle and a 9mm pistol were found in the rental car, Moore's report said.