Battle of the flood 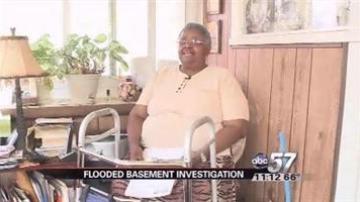 SOUTH BEND, Ind. -- A fight over a flooded basement took a new and nasty turn.  These piles are just part of the stuff Reverend Greg Brown has to carry up these steps.  His mother must take an inventory of all the damaged property.

"So that means that she can't climb the steps so everything has to be taken out to the garage," said Reverend Greg Brown.

Bertha says the cost of the paneling and walls as well as paying the plumber who came out to fix the problem is really something to cry about.

"Well I had to pay the Osceola sewer man," said Bertha Brown.

Luckily her insurance is footing most of the bill.  But there is a twist, a plumber says the blockage could have been caused by holes Nipsco was digging in Brown's front yard.  So the insurance company is going to investigate Nipsco and they may even take legal action if necessary.  I called Nipsco today.

I told Nelson to call Mr. Brown, because neighbors have told him otherwise.

"We have had a couple of people call saying they've had problems," said Brown.

After her talk with Mr. Brown, she called me back.

"The inspector is going to come back out or the engineer tomorrow," said Nelson.

The Brown Family said that tomorrow can't come soon enough, and neither can the end of the Diamond Avenue construction.