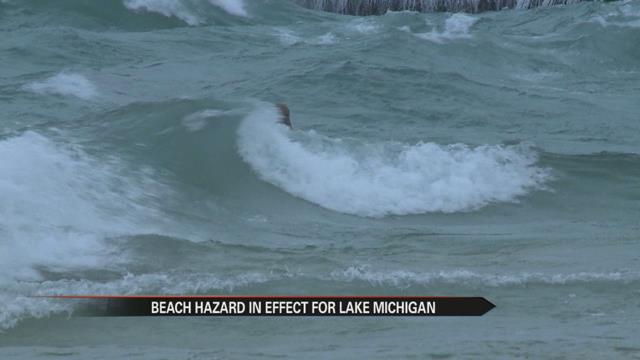 On Sunday, the National Weather Service issued a beach hazard statement for Berrien and La Porte counties that is in effect until Tuesday evening.

They said if you don’t know how to get out of a rip current, it’s better not to get in at all.

Chuck Schwarting, an avid surfer, says the waves at Silver Beach weren’t ideal for surfing but they were good enough.

“It’s always nice to get some time in the water, get your feet wet while you can,” said Schwarting.

But Nathan Milewski, who is being certified to perform search and rescues for the United States Coast Guard, says right now might not be the time to get wet.

“If you must swim, we recommend using life jackets, it’s not fashionable but it may end up saving your life in the event of a rip current,” said Milewski.

“You’re not gonna be able to get off of it by walking straight into it but if you walk to the side or swim to the side you can easily get out of the rip current,” said Milweski.

Higher winds may be a good sign for surfers but pose a threat to others at Silver Beach.

“We’re out here having a lot of fun, trying to surf, waves are a little choppy but definitely having a good time,” said Robert Gunn, who went to Silver Beach on Sunday.

“I recommend not walking the pier, the waves are famous for sweeping over the piers here in St. Joseph and I’ve seen a lot of people get swept off into the channel which is dangerous,” said Mileswki.

The United States Coast Guard has an app that will allow you to file a float plan and check the local weather buoy, to see where the winds are strongest.