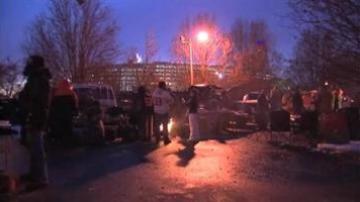 CHICAGO -- Chicago football fans know all too well what it takes to be a Bears fan in December.

Monday night, fans braved bitter temps outside Soldier Field in Chicago for the game against the Dallas Cowboys.

But the more the temperatures tanked, the more psyched up Bears fans got.

They were determined to stick it out to pay tribute to former head coach Mike Ditka who was honored with a special half-time performance.

"Tailgating is part of Chicago football. Without it, it's one of those things where you can go in the game, but if you're not tailgating, that's where you get the real experience," said Bears fan Michael Mondini.

The Bears did not let their frozen fans down. Quarterback Josh McCown threw a career high four touchdowns to beat the Cowboys 45 to 28.