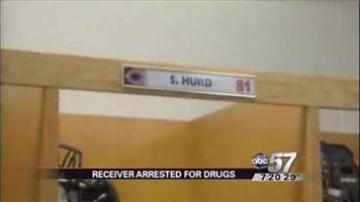 CHICAGO, Ill -- Chicago Bears fans had nothing to cheer about Wednesday night.

Wide receiver Sam Hurd was arrested on federal drug charges. The arrest happened when Hurd tried to sell drugs to an undercover agent.

It is reported Hurd was one of the top drug dealers in Chicago. A list of all his clients, including many NLF players, was obtained by authorities.

One teammate says it's just a terrible situation for everyone involved.

"You hate to see this happen to anyone,” said Bears linebacker Lance Briggs. “We all make mistakes, and it's just you know sad to see."

The Bears have three games left this season. They play the Seahawks Sunday at noon.