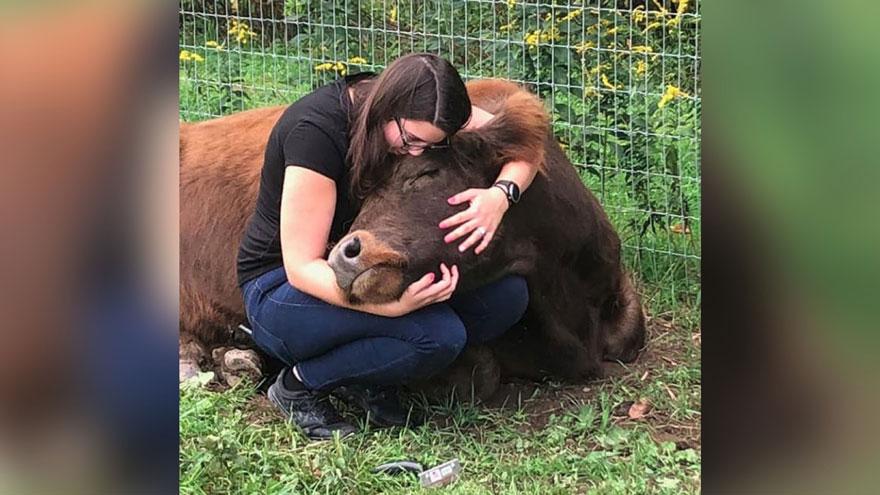 (CNN) -- The US is finally catching up to an adorable, stress-reducing, endorphin-releasing, magical practice that's been gaining popularity across Europe in recent years: cow cuddling.

"To be honest, we did not know that it was so unknown in the US," says Suzanne Vullers, a Netherlands native who added cows to her bed and breakfast last year after a trip back home.

Vullers and her husband run the Mountain Horse Farm, a luxurious 33-acre retreat in upstate New York. Animals are a big part of the lodging experience.

"In today's world, where a lot of communication seems to be through screens, I think people are missing a real connection to being outside in nature," Vullers said.

And they help rekindle that connection through their horses Cricket, Noa, Jaxon, Stetson, Suzie Q and Missy, and their cows Bonnie and Bella. They call it the "Horse & Cow experience."

"A lot of people are familiar with therapy dogs or cats ... people don't associate this with larger animals, like cows," she says.

The benefits of cuddling a cow

The farm had been offering wellness sessions with horses since 2010, when it first opened, but during her visit to the Netherlands, Vullers said she began hearing about the health benefits and stress relief that came with cuddling cows.

"Cows have this wonderful quality that when they are processing their food they like to lay down," she said. "They become really quiet, and it's a beautiful opportunity to connect with them."

If you can't help but move during each attempt at meditation, Vullers says this could be your alternative.

"Breathing exercises or mindfulness or yoga ... sometimes that's not so easy to do."

"(Cows) have a slightly slower heart rate," Vullers said. "And just feeling that from them makes you react to that and makes you slow down too. And because you're doing that in nature, it's really quiet."

So if you're feeling stressed out, anxious or going through grief, Vullers suggests Bella or Bonnie.

"That's the advantage of horses and cows. They don't talk to you, they just let you be," Vullers says.

I'm ready. When can I go cuddle?

There's a lot of preparation that goes into these sessions.

They're always scheduled ahead of time, usually planned in a way "that naturally flows with the rhythm of the animal," according to Vullers.

It's all about respecting what the cows want too, she said.

"We're not a petting zoo. It's not all about you. It's about us and them," she says. "For us, it's very important that the animals have choices and it's as much their choice to connect with humans as it is for us."

But usually, she said, the cows love the interactions.

"And it's not surprising, because cows and horses are social animals," she said.

The farm usually offers one to two sessions a day, which Vullers likes to keep to around two people. That will cost you about $75 for an hour.

The cuddles and the experience in nature are necessary to "stay healthy, mentally and physically," Vullers believes.