Bees worry farmers as much as freeze 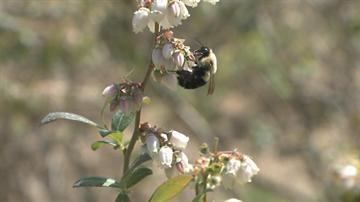 NILES, Mich. - If those farmers didn’t have enough to worry about already, now they’re sweating over bees.

A small window of time is closing in on crops that need to be pollinated and until Wednesday the weather kept most bees in their hives.

“This is a major concern,” said Steve Lecklider of Lehman’s Orchard. Wednesday was a sight for sore eyes. Thousands of bees were out pollinating seven acres of blueberries.

“It feels like it’s been forever for the bees to come out and work,” said Lecklider. Blueberries are Lehman’s most profitable crop and the bees couldn’t have come out at a better time.

“Not only did we have the frost and freeze situations we had concerns about whether or not crops were going to be pollinated,” he said.

Each fruit has a different period where bees need to be out. When cherries, peaches and pears bloomed in March it was 80 degrees. No problem for bees.

It needs to be at least 55 degrees for bees to leave the hive. “We had a lot of days that we’re either too windy or too cool,” said Lecklider.

Wednesday’s 70-degree temperatures couldn’t have happened at a better time. There’s only about a week left where blueberries can be pollinated.

If bees aren’t out… “You’re at the mercy of Mother Nature.”