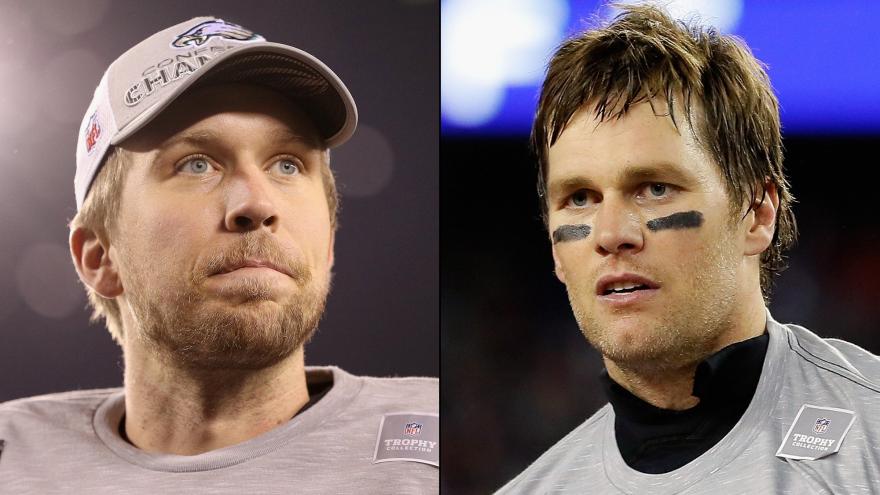 (CNN) -- There's snow and ice on the ground, but it's about to heat up inside US Bank Stadium. Super Bowl LII is here, and Bill Belichick and Tom Brady are back for yet another opportunity to add to the record books.

The New England Patriots, looking to repeat as champions, will face the Philadelphia Eagles on Sunday in frigid Minneapolis. Kickoff is scheduled for 6:30 p.m. ET (5:30 p.m. local time). While the Minneapolis stadium has a fixed roof, fans may need to think twice about tailgating: The National Weather Service calls for bitter cold and the wind chill to be 10 below zero for most of the weekend.

Perhaps it's appropriate the two teams that reached this point both are accustomed to cold weather. The Eagles lead the all-time series 7-6 against the Patriots, but New England has won four of the last five and is favored to win Sunday.

Philadelphia matched New England's win-loss record this season (both teams are 15-3 heading into the game) and clobbered the Minnesota Vikings 38-7 to win the NFC championship -- and disappointing the Minnesota faithful in the process. Like the Patriots, which defeated the Jacksonville Jaguars 24-20 in the AFC title game, the Eagles were the top seed in their conference.

Still, purple remains the dominant color in the Minneapolis area as fans sport the color of the host city team. And the Eagles would absolutely delight haters of the Patriots should they pull off an upset.

Sunday will be the Eagles' third Super Bowl appearance in franchise history, the last of which was a 24-21 loss to Brady, Belichick and the Patriots in Super Bowl XXXIX back in 2005.

Should they win a sixth, New England will tie the Pittsburgh Steelers for the most Super Bowl titles in history. And Belichick would pass Vince Lombardi and tie George Halas and Curly Lambeau with the most NFL championships in league history.

"It's hard for me to really picture that," Belichick said when asked about being linked with those famed coaches. "They're such great legendary coaches. I don't really see myself -- I don't think of it that way. I just think of how great they were, what they meant to the game, what they accomplished and how much respect I have for them."

Brady, who at 40 is making his NFL-record eighth career Super Bowl start, is the only starting quarterback in league history to win five Super Bowls and the only player to win four Super Bowl MVP awards (XXXVI, XXXVIII, XLIX and LI).

"I think Coach Belichick does a great job kind of getting the guys ready," Brady said. "I mean, this is exciting for me, too. So, I've never taken anything like this for granted, and I think we're all very fortunate to be in this game. It's a lot of hard work to get here."

It's a much different situation for the Eagles -- who have never won a Super Bowl -- and quarterback Nick Foles. The 29-year-old started the season as the backup but was pressed into duty when starter Carson Wentz suffered a torn ACL in December.

He's filled in admirably. In this year's postseason, Foles has completed 49 of 63 passes (77.8%) for 598 yards with three touchdowns and no interceptions for a 122.1 passer rating.

"Everyone around me helped me tremendously," Foles said. "We just kept working at it, fine-tuning everything, where we started to get a rhythm."

Foles is the fourth quarterback in the Super Bowl era to win two postseason games after making three or fewer starts in the regular season, joining Doug Williams (the 1987 Washington Redskins), Jeff Hostetler (the 1990 New York Giants) and Frank Reich (the 1992 Buffalo Bills).

He is trying to become the first backup quarterback to win a Super Bowl since Brady did it in the 2001 season.

Led by second-year head coach Doug Pederson, the Eagles had 13 regular-season wins, completing a worst-to-first turnaround. Philadelphia is the first team since the 2009 New Orleans Saints to win its division the season after finishing in or tied for last place and advance to the Super Bowl. New Orleans won the title that season.

"I'm excited," Pederson said. "This is a great opportunity for myself, our coaches, for our players, obviously, and the city of Philadelphia."