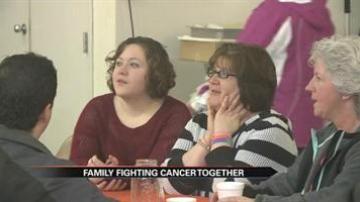 COLOMA, Mich. -- One community is coming together to show their support for a family going through a difficult time. A Coloma dad and his teenage daughter are both battling cancer.

They are hoping the small donation will go a long way for the Krueger family—because two people in the family are dealing with devastating diseases.

“Everybody coming out and helping us has made it a lot easier,” Karlye Krueger said.

At just 17 years old, Karlye Krueger was recently diagnosed with cancer, after noticing a lump on the right side of her neck.

“We found the lump and went to a few doctors and one of them confirmed that it was thyroid cancer,” Karlye explained.

Around the same time her dad was diagnosed with acute myeloid leukemia, a cancer that attacks bone marrow.

He also stopped by the benefit breakfast, but had gone home to get rest by the time ABC57 made it there.

“He’s had a great attitude he’s not going to let leukemia get him down,” said Cindy Krueger, Karlye’s mother.

Cindy and Karlye say they get stronger because of the support of all these people.

“It’s really been great having everyone involved and me being involved in choir has really helped me,” said Karlye.

“Just thank you to everybody that has helped. They don’t know how much it means to us,” Cindy said.

Karlye just had surgery and will undergo radiation. Her dad has two more rounds of chemotherapy.

A family friend plans to start a Facebook page for those wanting to show support.