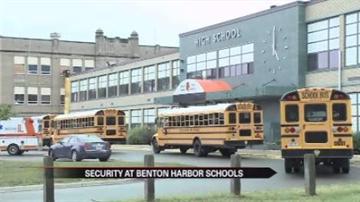 Tony Saunders, the Benton Harbor Emergency Financial Manager, said one reason the city is backing this proposal is because once the officers become trained reserved officers, they will be able to help with emergencies all over the city.

But not everyone is sold on this idea, especially since their training will not be as thorough as the public safety officers training.

"It's a whole different world outside of school, these kids are not playing, they carry guns and everything now," said former Benton Harbor High School student Calvin Brimite.

Some students who walk the halls everyday say putting seven unarmed reserve police officers in school will not solve anything. But some others are all for it.

After the double shooting in Broadway Park, the city hired two reserved officers to patrol the park. Residents in the area say their presence has made all the difference.

"I have to give the police their props, they have been such a help, but when they leave it’s a wrap, back to normal," said Queen Esther Jackson.

She says the city needs to be fighting violence from every angle, even if it means using reserve officers.

The students return to school the day after labor day, a decision on the reserve officers will be made by then.

Tony Saunders says he has been in talks with the FBI and Michigan State Police to see if they would be able to do crisis response training courses with the reserve officers.