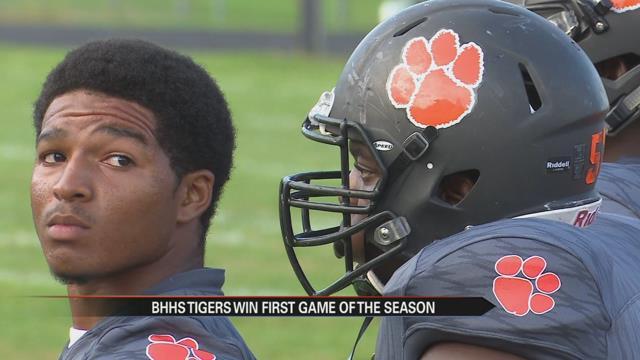 The road to restoring the roar in Benton Harbor kicked off Friday as the city’s hometown heroes returned to the field.

The tigers picked up the win against the Marshall Red Hawks with a 28-7 victory.

The entire city was behind this gridiron gang; even mayor Marcus Muhammad attended the team’s first game.

There might have been only a handful of cheerleaders on the field, but a sea tiger fans cheered the boys in black.

“I hope for the best, I’m just excited,” said Thomas.

That excitement brought the best out the team.

It also brought back memories for a few graduated stars from last season.

“Coming from 9-0 and losing all the games and then winning and going to the finals, that was a big jump for us,” Micah Goss, former Benton Harbor High School football player.

The team had momentum on their side and they came in focused this game.

“We’re proud of them. To be called Benton Harbor High School Tigers,” said Sally Johnson. “We’re tigers for life and class of 1983.”

From seasoned Tigers to new, support will always be here for this team, even after the Friday night lights dim.