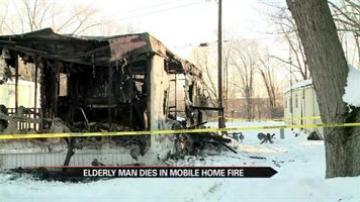 BENTON HARBOR, Mich. -- A mobile home caught fire around 1 a.m. Wednesday, killing the man who lived inside. Flames erupted inside of trailer 64 at the Orchard View Estates mobile home community park on the 1200 block of E. Empire Avenue in Benton Harbor, Michigan.

Several of James' neighbors saw the smoke and flames and called 9-1-1.

"Response time was about five minutes, it was only about a half a mile away," said Dan Durham, Chief of the Benton Charter Township Fire Department.

"It only took them 4 minutes from the time we called but it felt like an eternity, it seemed like hours," said Jose Garcia.

"We broke the windows trying to get to him, but the fire was spreading too quickly and it was going too fast," said Garcia.

Garcia was overwhelmed by the smoke and flames and was unable to rescue James.

Residents of Orchard View Estates are mourning the loss of their neighbor.

James had been living at Orchard View for almost 5 years.

Neighbors say he was a hardworking and religious man, who'd recently retired from truck-driving and liked to play the guitar.

At this point, the cause of the fire is unknown. The Benton Township Police Department is in charge of the investigation and said it is still an active investigation.