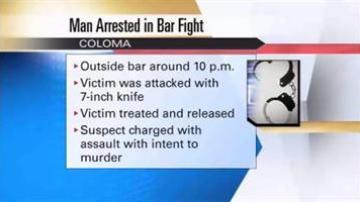 COLOMA, Mich. -- A Benton Harbor man is facing assault charges after police say he attacked someone with a knife.

It happened during a fight outside a bar in Coloma around 10 p.m. Tuesday night.

Witnesses say the man appeared to be intoxicated and insulted the victim leading to that fight.

That is when he attacked the victim with a seven inch knife.

The victim had several stitches on his jaw but has since been treated and released.

The suspect is charged with intent to murder and assault on a police officer.