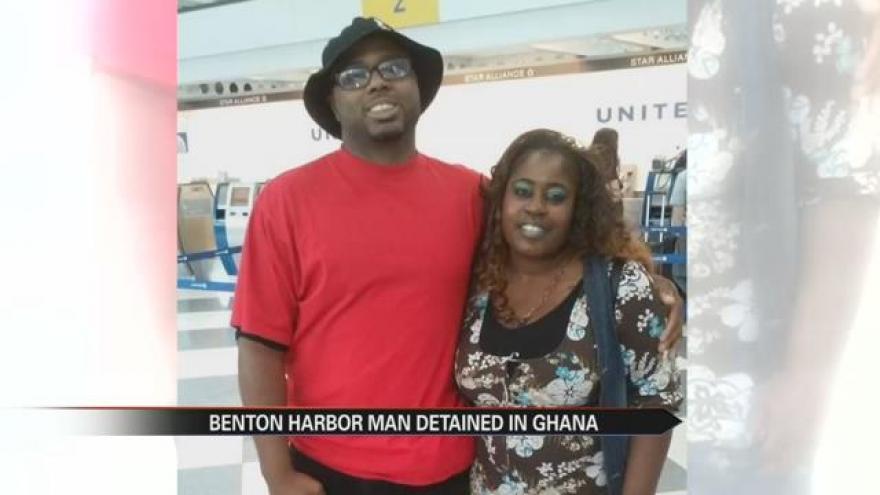 A Benton Harbor father is in custody in a foreign country. Three weeks ago Roy Barry was arrested in Ghana and accused of human trafficking.

Diplomats said they can’t do anything until Roy goes to trial on Wednesday.

On September 7th Roy's family said he arrived in Ghana. His family said he was attempting to travel to see his god-daughter and then bring her back to Michigan to visit family.

However, police there believe he was attempting to traffic her back to the United States.

Roy Barry's wife, Kimberly, is devastated and she is trying to stay strong.

Kimberly said, “I just need my husband at home. God is going to have to help us get through this.”

Kimberly said, “They said that my husband wanted to do human trafficking with Angel, why do they still have my Goddaughter? The embassy hasn’t even turned my Goddaughter to her mom!”

According to Kimberly Barry, in 2013 her family developed the pen-pal relationship with a family in Ghana. She said they've been saving up money ever since for this trip.

Kimberly said, “We loved them like our family, we treated them as family, my grand kids knew them, we Skyped, we talked!”

But when Roy brought the paperwork to the US- Embassy in Ghana for his goddaughter's visa, he was arrested.

Meanwhile, his wife is still in Benton Harbor with several unanswered questions about the good deed that turned into a nightmare.

Kimberly said, “We just wanted to make it special for her and show her how America was and just let her enjoy herself for the little time that she would be here and it turned into a disaster.”

Kimberly said it ends up that the father of their Goddaughter actually isn't her biological father, and she's wondering if that played a role in her husband's arrest.

ABC57's Alexandra Koehn called the state department and all they would confirm on the phone is that Roy is not allowed to leave Ghana at this time.

A state department spokesperson said, "I cannot release any information due to privacy considerations, so if you have questions about the trial or the legal proceedings, I’m going to have to recommend you contact the Ghanaian officials.”

Congressman Fred Upton’s office is helping the family but they are unable to comment on the investigation.