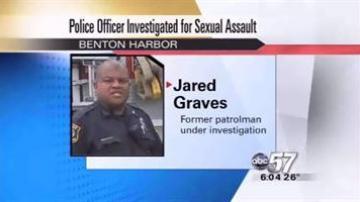 BENTON HARBOR, Mich. -- A Benton Harbor police officer has resigned over allegations of a sex scandal.

Jared Graves, a 14-year veteran patrolman, is being investigated by Michigan State Police.

A woman reported that Graves picked her up for marijuana possession.  She said he later let her go in exchange for sexual favors.

Benton Harbor police are not releasing too many details, but they did confirm that Graves quit his job this week.

We should know by the end of the week whether or not criminal charges will be filed.