Benton Harbor School Board president: 'I did not resign' 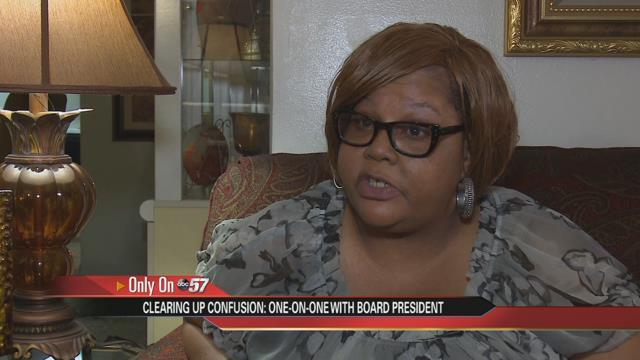 In an exclusive interview, the president of the Benton Harbor Area School Board discusses why she walked out of a meeting and whether or not she has resigned.

“I did not resign,” Sharon James, the school board’s president, said. “I did not say that I was resigning and I have not tendered a letter of resignation.”

James said she does not regret walking out of an emergency school board meeting that was held at Benton Harbor High School Thursday night, even though it left her colleagues wondering if she was quitting.

“I left because I was emotional, [my colleagues] needed the respect, I didn’t want to have these emotions try to appear as though they were some form of influence,” James said.

She said she walked out in the middle of the meeting because she knew she would get visibly emotional as her colleagues voted ‘for’ or ‘against’ her in a ‘vote of confidence.’

She said she didn’t want to distract them or unintentionally pressure them into supporting her or not.

The meeting was called after James got into a heated argument with another school board member in a parking lot after a meeting Tuesday night.

James is accused of threatening her colleague – which prompted Thursday’s emergency meeting.

James said the conversation in the parking lot was tense, but no threats were made.

“I said, initially, ‘Lemme talk to you, ok?’” James said, referring to speaking to her colleague. “And she was saying no. And I said, ‘You’re an adult woman, aren’t you?’ I said I’m an adult woman; you mean two adults can’t have a conversation? I can’t talk to you?”

She added that both she and her colleague “had an aggressive tone with each other, so that was an even exchange.”

Benton Harbor Schools Superintendent Dr. Shelly Walker was at Thursday’s meeting, but she said she has not spoken with James about her walking out.

Walker also said she is confident the board will regroup.

“These are really, really passionate and caring people and their hearts are in the right place and they’re wise,” Walker said. “So I have high confidence that we will definitely work through this.”

James said she probably could’ve better explained her reasoning for walking out to her fellow board members, but she doesn’t regret it.

She also said she planned on attending Benton Harbor High School’s graduation Friday night as the board president.

“I’m thinking about, my name is on those diplomas,” James said. “And I have a responsibility to our young people to show them how you move through adversity with grace…I definitely will attend graduation.”

The board member James had the altercation with did not respond to requests for comment Friday.

James said if her fellow board members wanted her to remain president, she would, but she said she had elaborated on Thursday that, “I do not want to be in an unwelcome space.”

As of Friday, James was still the board president because the ‘no confidence’ vote was not taken after James left Thursday’s meeting.

The Benton Harbor School Board has a meeting planned for Monday evening to discuss ‘material review.’