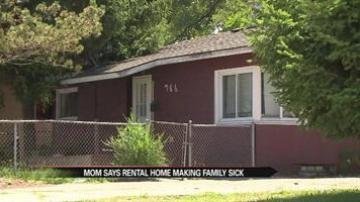 BENTON HARBOR, Mich. -- Marnisha Brumfield rents a house on East Britain in Benton Harbor.  She says since March, the mold in her house has gotten out of control.

Brumfield says her couch is soaked, and her bed is damp, but there are not any visible leaks in the house.

She says there is even mold in the cabinets in her kitchen.

Brumfield says she has talked to her landlord, Eugene Branch, about the mildew in the house and health hazards.

"Eugene told me to use some bleach, spray it down, and wipe off the mold," said Brumfield.

But Brumfield says there is no escaping the mildew and humidity in her home; this problem needs a permanent solution.

"We can’t sleep in our beds, we can't sit on our furniture.  We have lost everything now."

Brumfield says she and her three year old daughter jumped from one bad living situation to another.

"The roof caved in on the house before this in my daughter's room in the middle of winter," said Brumfield.

Brumfield says she hopes something will be done soon-tenants who pay their rent deserve to live in a healthy and safe environment.

The city inspector is expected to inspect the property on July 29.