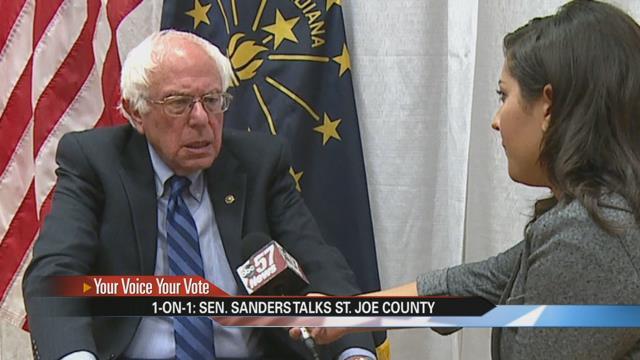 ABC 57’s Sara Rivest sat down with presidential hopeful Bernie Sanders before his campaign rally in South Bend on Sunday.

“With the kind of support we are seeing out there I think Indiana will be our eighteenth victory,” said Sanders.

Ahead of Tuesday's primary, we wanted to know how the senator plans to combat some of the biggest issues St. Joseph County is currently facing.

“I will do everything I can to bring about a real change in the way we do mental health treatment in America. It should be considered part of health care. It should be accessible to all people regardless of their income when they need it, not six months from now.”

“As companies shut down and move to Mexico, move to China, or other low wage countries, that’s got to change. We’ve got to rebuild the middle class, we’ve got to rebuild our manufacturing sector and if elected president we will fundamentally alter the trade policies of this country so the corporate America starts investing here.”

Moving forward, Sanders says he is committed to staying in the campaign.

“We are in this race until the last vote is cast which will be June 14 and we think we have a path towards victory and that means fighting for every delegate and every vote and it means that we will do everything we can to win here in Indiana.”