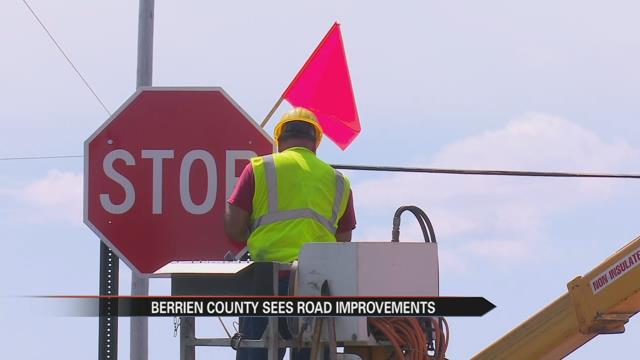 A troublesome stretch of road in Berrien County is getting some upgrades in hopes of saving some lives.

“I think it’s a good thing,” Rose Bammann said. “There’s been a lot of people killed here and a lot of accidents.”

In the 35 years Bammann has lived on Cleveland Avenue in Lincoln Charter Township, she has watched multiple accidents happen where her street intersects with Linco Road, including a deadly crash in June.

“People just don’t stop at the stop sign,” she said.

Cars fly down Cleveland Ave., creating a dangerous stretch of road when drivers blow through the stop signs on either side of Linco Rd.

But on Friday, the Berrien County Road Commission made some changes.

“If you make it a four-way stop, that means that you have half the chance of the probability of somebody blowing through that stop sign because now you’ve doubled the number of stop signs,” Berrien County Road Commission Managing Director Louis Csokasy said.

So that’s exactly what was installed Friday afternoon – a four-way stop to help manage a roadway Bammann said has gotten busier over the years.

“[It has gotten] a lot busier because there’s a lot of before and after-work traffic that goes up and down this road,” she said.

Csokasy said the road commission constantly studies traffic counts so appropriate upgrades can be made to the roads, but he said intersections like Cleveland and Linco often become a focus after tragedy.

“Every time we have a serious accident anywhere in the county, we actually go out and investigate the site to make sure it is, in fact, as safe as we can make it,” Csokasy said.

But adding signage is just half the battle, according to Csokasy, because making residents aware of the upgrade is necessary.

Csokasy added, “I’ve done it myself.”

To help prevent people from running the new stop signs, additional signage and flags have been installed yards ahead of the intersection warning drivers of the new traffic pattern.