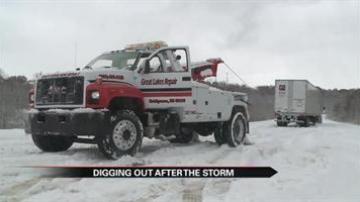 BERRIEN COUNTY, Mich. -- Buried in snow. That's how a lot of people in Berrien County feel. Resident say they didn't think it would be this bad.

"It's just a little soon. It makes winter long when it snows in November," said Allred.

He's one of many Berrien County residents pushing through the elements.

Drivers found themselves having to take it a little slow.

The ones who didn't met Rich Lenardson of Great Lakes Towing.

"Small businesses like us - we depend on bad winter," said Lenardson.

Lenardson says the preparations he made yesterday were worth it.

He and others have been responding to dozens of slideoffs for the last twelve hours.

"There's nothing we can do about it. We just have to try and help people as we come along to them," said Chief Daniel Sullivan of the Lincoln Township Police Department.

Sullivan kept an eye on traffic while Lenardson and his guys saved a semi.

Sullivan says slowing down is always good advice, but sometimes, accidents are inevitable.

"Especially around the freeway, you have a lot of people, who in this case, didn't know there was snow storm. They drove into it, and ten minutes into it, it's a foot deep," said Sullivan.

Allred is thinking about what the coming weeks will bring.

"Last year wasn't too bad. We had a few storms, but this year, the Farmer's Almanac does say a lot of snow," said Allred.