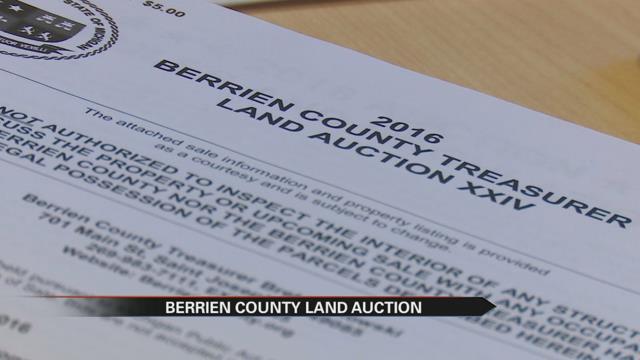 If you live in Berrien County and you’re looking for a new investment at a bargain, you’ll want to stop by the county’s land auction Tuesday.

“I think Berrien County is doing well financially, but the recovery never hit a lot of people in this county,” Berrien County Treasurer Bret Witkowski said.

A lack of recovery after the economy collapsed in 2008 not only left many properties in Berrien County up for sale or lease, but it caused a big increase in foreclosures.

Witkowski said he auctioned off 88 foreclosed properties in 2004, but on Tuesday, he’ll be auctioning off 280 properties in the second land auction of the year.

“We are running 100 percent higher,” Witkowski said. “And it’s not because the taxes are any more in Berrien County then they were before [the economic collapse]. It’s because the middle to middle-low income has become smaller and smaller.”

The impact is noticeable throughout the county.

The Summit Powders Inc. factor on East Empire Ave. in Benton Township has been abandoned for years.

“It is a little discouraging to know how it was at one time; how it used to be at one time,” Jonathan Bowman, a lifelong Berrien County resident, said of the county’s economic state.

Bowman’s family lives across the street from the foreclosed Summit Powders Inc. factory.

He said it’s become the scene of break-ins, as well as a familiar site, because business after business in his community has shut down in recent years.

But Bowman said he’s hopeful the auction will be a step in the right direction.

“I think it’s an excellent idea,” Bowman said. “Hopefully it’ll work toward bettering the economy, so, I think it’s a great idea.”

The 280 properties up for auction Tuesday range from empty lots to abandoned homes and businesses; all foreclosed because of unpaid taxes.

A 10-acre Benton Township lot up for auction was a mobile home community years ago.

Bidding for it will start at $50 – the same starting price for all the properties.

Witkowski hopes to sell nearly all the properties at Tuesday’s auction, which will be held at the D.A.N.K banquet hall in Benton Harbor on Pipestone Road.

Witkowski said it’s an opportunity for an economic boost and new investments for the everyday Berrien County resident.

“I call it the average Joe, average Jane auction,” Witkowski said. “Where you don’t have to spend your life savings to buy a property that you hope can make it.”

The number of properties foreclosed in Berrien County was nearing 1,000 earlier this year, but a new payment plan system put in place a few months ago helped that number drop.

To qualify for Tuesday’s auction, you need to bring $250 with you, and you can’t already own any delinquent properties.

Registration will start at 8 a.m. Tuesday, and the auction will kick off at 9:30 a.m.