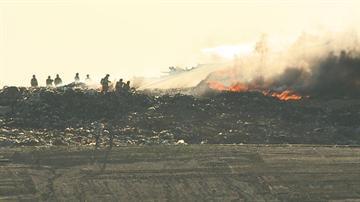 BERTRAND TOWNSHIP, Mich. – A huge black cloud of smoke billowed out from a fire at the top of a massive pile of garbage at the Berrien County Landfill on Thursday evening.

According to staff at the landfill, the fire may have been started by something hot being dumped by one of the last trucks of the day.  The crews dump shredded tires on top of the garbage pile at the end of each day, the pieces of tire chips must have started smoldering on the warm piece of trash.

“The wind that was blowing obviously sparked a fire and we had some tire chips up there that we use for daily cover and the fire worked its way and kind of got into the tire chip pile,” described General Manager Sonny Fuller.

Fighting a fire on top of tons of garbage isn’t easy, but apparently the fire took place at a time that made it less hazardous to firefighters.

“This time of night especially is probably one of the safer times to be up there, because we’ve already covered everything with dirt and tire chips and went home,” Sonny Fuller explained.  “So all the garbage and everything that would be exposed was covered for the day.”

Nobody was hurt as a result of the fire.