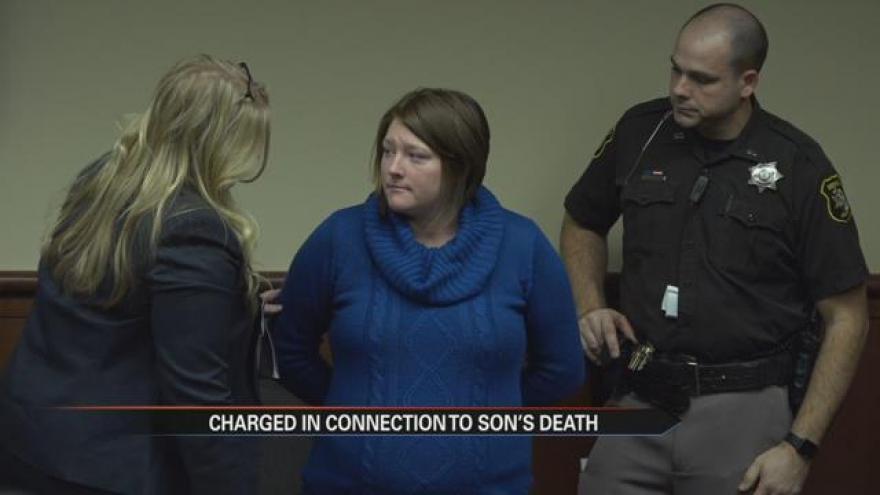 Autumn Atchley was tearful Monday afternoon as a Berrien County judge sentenced her for her role in the murder of her 8-month-old son.

“I regret the trust that I put in him because I lost my son because of that,” Atchley said, referring to her ex-boyfriend Brandon Beshires.

She accepted responsibility for her role in baby Carter Donovan’s February 2016 murder.

“I failed to recognize what kind of a man Brandon was,” Atchley said. “I imagined him as the kid I used to hang out with in high school…and no one is more ashamed of myself than I am.”

Atchley had left her son with Beshires – her then-boyfriend – while she went to a doctor’s appointment.

Beshires killed the 8-month-old while she was gone.

When Atchley returned, Beshires allegedly threatened her to not give police his name.

She complied for a few hours – after bringing Carter to the hospital – which led to her being charged as an accessory, after the fact, in the baby’s death.

“I don’t really understand, frankly, that when your little one’s hurt, you took him to the hospital, how you could lie for that guy…you did for over – what I read in the report – six hours; lying to cover up for him,” Cotter said.

Cotter said he could not understand why, during the last year of court hearings, Atchley didn’t do everything she could to prove Beshires was solely responsible for her son’s death.

“I want the S-O-B, who killed my little kid, smashed his head so hard, he fractured the skull in that bathroom,” Cotter said, speaking to Atchley as if he were her. “I want him held responsible. And you know what? I’ll do anything, I’ll testify against him. I’ll get out and point the finger at him – he was the one who did it, I was scared then cause he threatened me, but I want him held responsible for the death of the most precious thing in my life, my son.”

“I didn’t hear [you say] that,” Cotter said, speaking to Atchley after saying the aforementioned paragraph. “I don’t understand why not!”

He then sentenced Atchley to 240 days in prison and three years of probation.

Atchley’s new attorney said her client is a victim, and she plans to respond to the judge’s decision because she said Atchley told her previous attorney she was willing to testify against Beshires.

It was also learned in court that Atchley had given birth to a second son this past December.

Her attorney said Atchley is fighting for custody of her son, while dealing with her new sentence.

Atchley’s family was inside the courtroom Monday, but they did not want to comment.

Baby Carter’s father was not there Monday, but he was in the courtroom last week when Beshires was sentenced to life in prison without the possibility of parole.