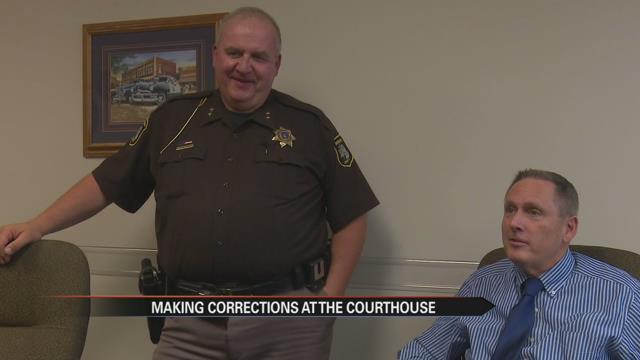 After the tragic shooting inside the Berrien County courthouse, Sheriff Paul Bailey is determined to never let that happen again.

In the short term, Sheriff Bailey has a two-fold plan: more deputies and more safety equipment.

“We need to have uniformed deputies in that building in greater numbers than we had before,” said Judge Gary Bruce, who was inside the courthouse the day of the shooting.

“Nobody will be moved to and from the courtrooms without two deputies or a deputy and a bailiff escorting them back,” said Sheriff Paul Bailey.

"Tragedy happened to two of our close friends, so we want to take a look at what happened, and why did it happen?" said the sheriff.

As they look further into what happened, they’ve hired two new deputies and hope to hire more in the future.

In the past, however, they had been losing personnel.

And the deputies they did retain were often stretched thin.

“When things get busy at the courthouse, when you have all the different courtrooms going, there was times when only one person would take the person back to the cell,” the sheriff said.

Now, however, everyone seems to be in agreement that more protectors are essential for better protection. And the Board of Commissioners  has increased the sheriff’s budget.

Judge Gary Bruce wants to reassure the people of Berrien County that they can feel safe again walking into the courthouse.

“I want everybody who comes into that building to know that when they come in there, they’re going to be protected. This type of incident is not going to happen again,” said Judge Bruce.

Sheriff Bailey said after the new hires, they will have three full-time deputies at the Berrien
County courthouse. He wouldn’t go into detail about the safety equipment they’re buying for security reasons, but these goals are approved and in the works.