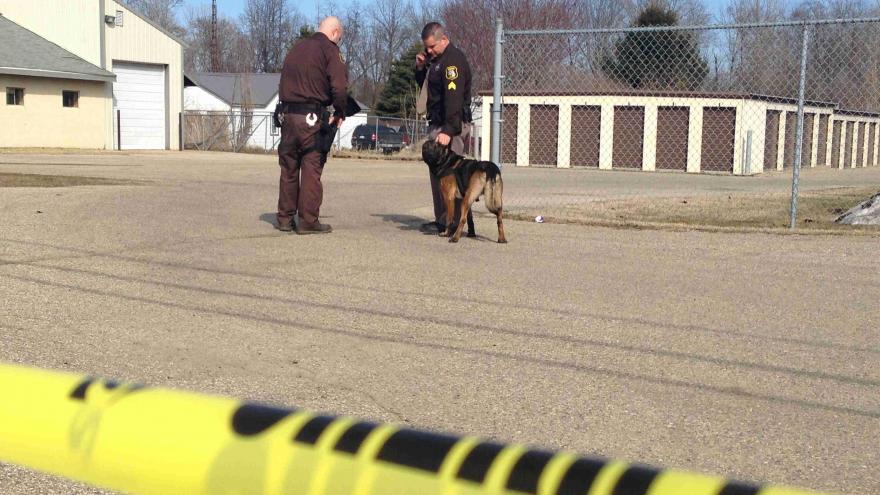 Berrien County Sheriff's Deputies are searching for a suspect involved with a shooting that took place in Niles.

A 24-year-old female was taken to Memorial Hospital in South Bend where she underwent emergency surgery and is listed in critical condition.

A gold Impala was left near the back of the storage units.

The Berrien County Mobile Crime Lab was on scene to assist with the investigation, along with officers from the Michigan State Police.

Police also brought in K-9 units to help search for the suspect.

Authorities say they are searching for the woman's boyfriend, Michael Jerome Exom III. They describe Exom as being a 28-year-old 5'10 black male, weighing approximately 210 pounds with black hair and brown eyes.

Police say Exom and the woman had a domestic argument when he pulled out a handgun and shot the woman before he fled the scene.

According to officials, Exom was last seen fleeing the area  in a four-door, light blue 2004 Buick Park Avenue.

Exom is wanted for charges of Assault with the Intent to Murder and a Felony Firearms charge.

The Berrien County Sheriff's Department warns that Exom should be considered armed and dangerous.

If you know of the whereabouts of Michael Jerome Exom III or you have any information on this crime, you are asked to contact the Berrien County Sheriff's Office at (269) 983-7141 or email them at [email protected].