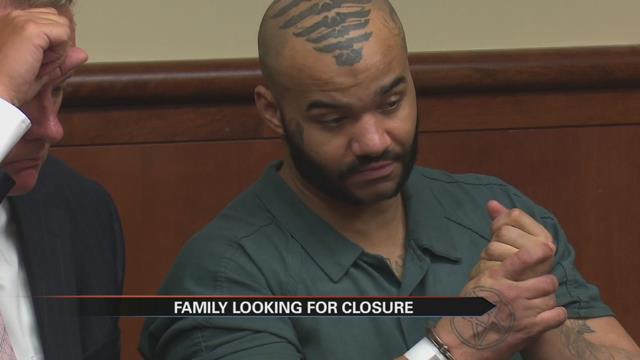 The Berrien County man accused of killing a baby last winter was in court today – his first appearance after being deemed competent to stand trial.

“Our family is looking for closure, and want justice to be served to honor Carter, and the young life that was taken,” Mike Meachum, the great uncle of Carter Donovan, said outside the Berrien County Courthouse Tuesday afternoon.

Donovan’s face and name were plastered on t-shirts and stickers, as him family gathered outside the courthouse.

Brandon Beshires, who is accused of killing the 8-month-old baby boy last February, had appeared before a judge moments earlier.

“We’re just gonna put the evidence on and let the chips fall where they may,” Don Sappanos, Beshires’ attorney, said. “And if we have different doctors with different opinions, then it’s gonna be up to the jury to decide what they believe, based on the expert testimony.”

The case will now go directly to a jury trial, where Sappanos said medical evidence will be key.

“It’s gonna come down to the battle of the [medical] experts,” Sappanos said. “So now, we need to have an independent doctor take a look at the injuries, take a look at the statements, and see, if in fact, the state’s expert has it right, or, if there’s simply another explanation.”

Beshires is charged with three felonies and faces up to three life terms in prison if convicted.

Prosecutors say baby Carter died after being struck on the head, while Beshires was watching the boy as his mom went to a doctor’s appointment.

Carter’s great uncle said his family is turning to faith as they prepare for trial.

“As a man of God, I want Brandon Beshires to find in his heart to ask for forgiveness from God,” Meachum said. “That’s the only thing he can do to make amends of this.”

Beshires has entered a not guilty plea; his trial will begin on October 25.

One week later, on November 1, baby Carter’s mother, Autumn Atchley, is set to stand trial; she is charged as an accessory in the murder of her 8-month-old son.