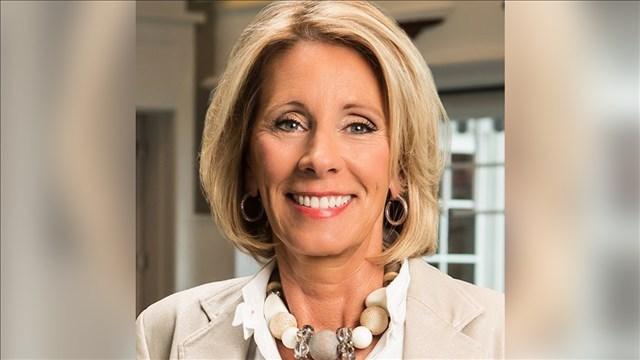 Trump met with the billionaire donor and conservative activist this weekend at his golf club in New Jersey, where he hosted a slew of potential Cabinet appointees. Trump offered DeVos the position on Tuesday and she accepted the same day, a senior Trump transition official told CNN.

"Betsy DeVos is a brilliant and passionate education advocate," Trump said in a statement Wednesday. "Under her leadership we will reform the US education system and break the bureaucracy that is holding our children back so that we can deliver world-class education and school choice to all families."

But Trump is also already drawing fire from both sides of the political spectrum for his pick. The largest teacher's union in the country slammed DeVos within an hour of the announcement for her advocacy of charter schools and school voucher programs, while conservatives quickly pointed out DeVos' association with groups supporting the Common Core education standards, which Trump has vowed to nix.

DeVos moved quickly on Wednesday to quell any uproar on the right over her association with pro-Common Core groups, saying, "I am not a supporter -- period."

DeVos chairs the American Federation for Children, a group that promotes charter school education, and also served on the board of the Foundation for Excellence in Education, a group led by former Florida Gov. Jeb Bush -- one of Trump's GOP primary opponents -- which promoted both school choice and the Common Core education standards.

And so while Trump vowed to eliminate Common Core, his pick of DeVos has begun to scare conservative opponents of the standards.

DeVos insisted in the post on her website that she supports "high standards, strong accountability and local control."

"Have organizations that I have been a part of supported Common Core? Of course. But that's not my position," she wrote.

As speculation swirled Tuesday that DeVos might snag the top education job, conservative opponents of Common Core began to warn Trump away from DeVos.

Frank Cannon, the president of the adamantly anti-Common Core American Principles Project, said in a statement Tuesday that DeVos would be "a very Jeb-like pick" and called it "puzzling" that Trump was considering DeVos for the post.

"He repeatedly assured parents across the heartland that he intended to return power over education to local schools," Cannon said of Trump. "It is puzzling, then, to see reports that the Trump transition team is considering an establishment, pro-Common Core Secretary of Education -- this would not qualify as 'draining the swamp' -- and it seems to fly in the face of what Trump has stated on education policy up to this point."

After the pick was announced, the pro-Trump news site Breitbart blared the headline: "TRUMP ANNOUNCES PRO-COMMON CORE EDUCATION SECRETARY" -- noting the second apparent betrayal in as many days. The site also rebuked Trump's announcement he no longer plans to push for prosecution of his Democratic rival Hillary Clinton as a "broken promise."

DeVos did not initially mention Common Core in a statement Wednesday, but said broadly that "the status quo in education is not acceptable."

"Together, we can work to make transformational change that ensures every student in America has the opportunity to fulfill his or her highest potential," DeVos said in a statement.

"Her allegiance is to families, particularly those struggling at the bottom of the economic ladder, not to an outdated public education model that has failed them from one generation to the next," Bush wrote. "I cannot think of more effective and passionate change agent to press for a new education vision, one in which students, rather than adults and bureaucracies, become the priority in our nation's classrooms."

DeVos has been involved in Republican politics both as a donor and as a party official for decades and served as the state Republican Party chair in Michigan.

The National Education Association, the largest labor union in the US, was quick to slam Trump's pick, arguing that DeVos has "done more to undermine public education than support students" and accusing her of pushing "a corporate agenda."

"She has lobbied for failed schemes, like vouchers --- which take away funding and local control from our public schools --- to fund private schools at taxpayers' expense. These schemes do nothing to help our most-vulnerable students while they ignore or exacerbate glaring opportunity gaps. She has consistently pushed a corporate agenda to privatize, de-professionalize and impose cookie-cutter solutions to public education," the labor union representing teachers and school administrators said in a statement. "By nominating Betsy DeVos, the Trump administration has demonstrated just how out of touch it is with what works best for students, parents, educators and communities."