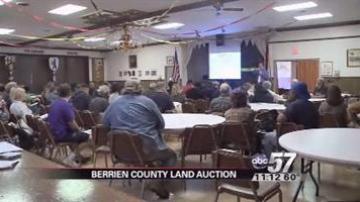 BENTON HARBOR, Mich. -- Plenty of people packed a room inside the DANK building on Pipestone Avenue in Benton Harbor Tuesday morning. They are all sitting there for what’s nicknamed 'The Average-Joe Auction.'

The auction was one of Berrien County's biggest in 12 years. A man in the front row, quietly bidding on dozens of the County's tax delinquent properties, thinks he got the best deal.

"It's about the best, prime land around here I think," he says.

His name is Tony Coleman and he is a seasoned bidder. Tuesday he became the new owner of a nine-acre piece of commercial land off Pipestone in Benton Township.

"(It) wasn't too many years back it had to be worth $800 thousand. Hopefully in the next couple years it'll start paying out or something."

Coleman got it for $25,000, one-tenth of its appraised value . It's worth was worth that a few years ago.

"I would say this is in the top five in value in (the auction's) history," says Bret Witkowski, Berrien County's Treasurer.

The land sits right in the middle of millions of dollars in new development. It's surrounded by restaurants, a Meijer, and a Home Depot. "It's like gold. It has value," says Witkowski.

"We're never going to make more land and it has value to be zoned commercially in Benton Township on Pipestone Road."

"(It) might take five to 10 years to come back but I think it's a great spot," says Coleman. He says he'll sit on it, pay the taxes and hope the economy rebounds and new development is needed in the area.

But it's still a gamble. After all, its vacant and the land hasn't been developed on yet.

"Hopefully, you keep working it and it don't do nothing but keep paying off," says Coleman. "I hope I'm on the right end of that one."