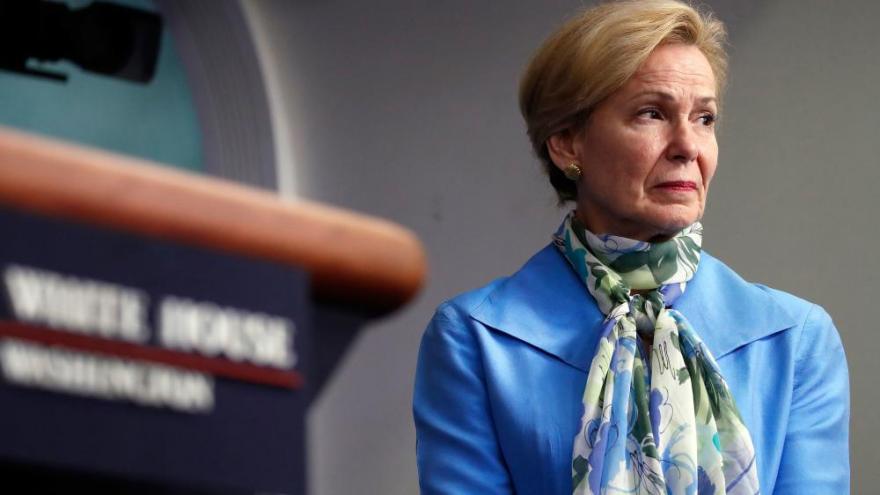 Dr. Deborah Birx, White House coronavirus response coordinator, listens during a briefing about the coronavirus at the White House, Tuesday, April 21, 2020, in Washington.

(CNN) -- Dr. Deborah Birx, the White House coronavirus response coordinator, said Sunday that the US will need a breakthrough in testing to help screen large numbers of people for the virus.

While the country is continuing to scale coronavirus testing, Birx said on NBC's "Meet the Press" that "we have to realize that we have to have a breakthrough innovation in testing."

"We have to be able to detect antigen, rather than constantly trying to detect the actual live virus, or the viral particles itself," she added.

In calling for a breakthrough, Birx was referring to a type of testing technology -- antigen testing -- that is often used for rapid flu tests.

Her comments come as more states plan phased reopenings of their economies, even though public health professionals have repeatedly stressed the dangers of relaxing social distancing measures too early.

Experts widely agree that states and localities will need robust testing and contact tracing programs in order to control the pandemic without strict social distancing measures, but many governors have reported shortages of critical supplies needed to run coronavirus tests.

That's a problem because experts say the ability to quickly identify new coronavirus cases -- and then quarantine those who might have been exposed -- will be crucial to returning to normal life.

Dr. Anthony Fauci, another key member of the White House coronavirus task force, stressed that point on Saturday, saying pointedly that the US should double its testing capacity.

"We probably should get up to twice that as we get into the next several weeks, and I think we will," he said on the National Academy of Sciences Covid-19 Update webcast.

Fauci estimated that the US is conducting approximately 1.5 to 2 million Covid-19 tests per week, but noted that "testing is an important part, but it's not the only part."

In an interview Sunday on CNN's "State of the Union," Birx emphasized how the administration has been working over the past week to increase testing capacity -- both by increasing laboratory usage and by making sure governors are aware of available facilities in their states.

"For every lab, though, they're now -- they now have six or seven platforms that they have to integrate and utilize. And labs are learning now how to bring all of those platforms up to hopefully double and increase our testing ability across the country, and to really align the needs," Birx told CNN's Jake Tapper.

Birx added that "there's over 5,000 pieces of equipment in the United States that can run these tests and we're very excited to see all of those utilized."

Unlike most current tests, which are called PCR tests, antigen tests look for characteristic structures from a virus. These structures, often on the virus' surface, help trigger an immune response.

"I know corporations and diagnostics are working on that now. We have to have a breakthrough," Birx told NBC's Chuck Todd on Sunday. Current technology, she suggested, would only be sufficient for so long.

"This RNA testing will carry us, certainly, through the spring and summer, but we need to have a huge technology breakthrough, and we're working on that at the same time," she said.

Those advances would allow us to "screen large numbers of individuals quickly," Birx added.

She made her comments after "Meet the Press" played a soundbite from philanthropist Bill Gates, who criticized the federal government's "unwillingness" to get involved in "test prioritization."