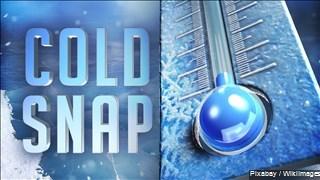 Frigid temperatures have taken over all of Michiana. The record low temperature on this date in South Bend was broken early Monday morning when the mercury fell to  -10 degrees and continued to drop. The previous record of -9 degrees was set back in 1983.

A wind chill advisory is in effect for the entire area through noon Monday. Wind chills could drop as low as -25 to -30 degrees in some areas.

Several schools have closed or are on a two hour delay due to the cold.

The cold is also forcing the South Shore line to bus passengers between South Bend and Michigan City. The commuter line warning of possible delays as a result.

Service alert regarding weather below. pic.twitter.com/uOWVYj3C4m

The Martin Luther King Junior Center in South Bend is staying open through Tuesday night for anyone needing a warm place to stay.

The temperatures are expected to rebound into the 20's on Tuesday and the 30's on Wednesday.