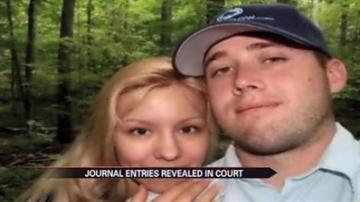 PHOENIX, Ariz. -- A Phoenix woman on trial for murdering her boyfriend wrote some bizarre journal entries that were revealed in court Thursday.

Jodi Arias is charged with stabbing and shooting her boyfriend, Travis Alexander but days after the killing she wrote in her journal,  "It just feels like he hasn't called me in too long" and "If I ever have a son, I'll name him Alexander."

Prosecutors say the entry and her interview with police proves she is in denial of the murder.

"I don't think I could stab him. I think I would have to shoot him, continuously, until he was dead," said Arias.

The defense argued that she killed him in self defense because Alexander abused her.