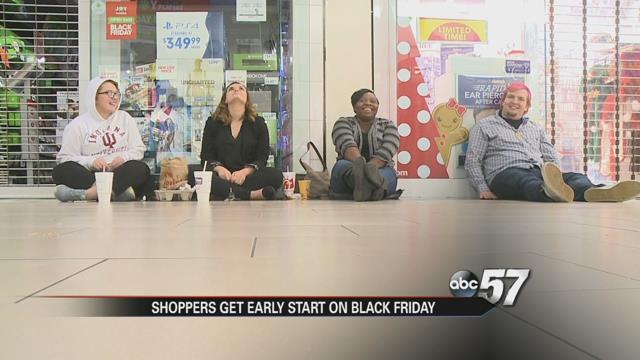 Black Friday started off on a quiet note in Michiana.

Lighthouse Place Premium Outlets in Michigan City was opened throughout the night and had crowds lining up outside certain stores – like The North Face store – around midnight.

In Mishawaka, the University Park Mall welcomed its first wave of Black Friday shoppers on Thursday, from 6 p.m. to 1 a.m., and then back again Friday morning starting at 6 a.m.

A number of stores chose to remain open throughout the night in the mall, though, allowing shoppers to make certain purchases in the early morning hours.

Four people were sitting outside the closed GameStop store in the mall around 3 a.m., waiting to purchase the PlayStation 4.

Ottbridge had been in the mall since midnight and was waiting until GameStop opened at 5 a.m.

“So far, it’s been very fun,” Ottbridge said. “People will talk to you; they’ll stop and say, you know, ‘what are you doing here?’ and it’s just like, ‘PlayStation 4,’ and they just think I’m crazy and they walk away.”

Ottbridge was chatting with fellow Black Friday shopper Sean Corbett as they waited outside Game Stop.

“[Black Friday shopping] can be, like, there’s some good deals,” Corbett said. “I’m not gonna cut in on my family time [for shopping]. I waited well until after family time was over to come out.”

The University Park Mall officially reopened for Black Friday at 6 a.m. and will remain open until 10 p.m.